158 questions were asked: for the first time, scientists found that dreams can answer math problems correctly

Sleep accounts for nearly one third of our life.

For most mammals, sleep has two states:

The second is rapid eye movement sleep (REM). In this stage, the eyes will rotate rapidly, and the brain waves are more like the state when awake, with faster frequency and lower amplitude.

More importantly, the data show that,Each person has five dreams every night, which all happen at this stage. The relationship between REM and dreams has always been a major research area of scientists all over the world.

Previously, scientists started from REM stage and solved many puzzles of ordinary people, such as:

In a new dream study, scientists have even realized real-time conversation between dreamers and others for the first time! 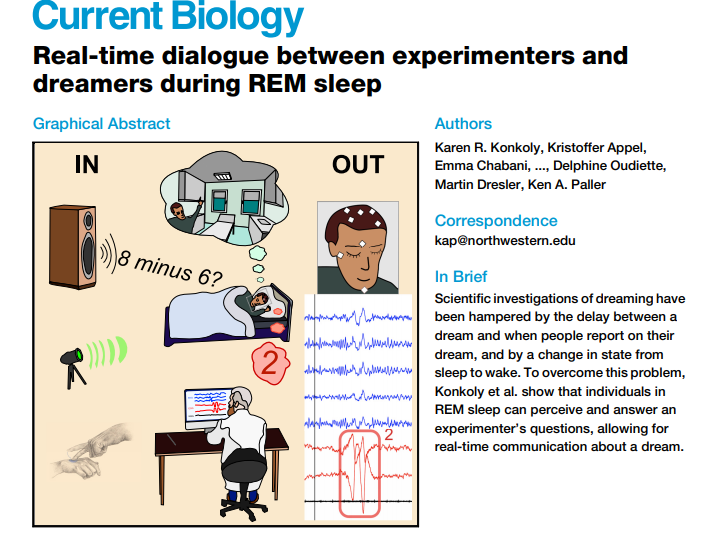 On February 18, 2021, the related research results were published in current biology. The paper is entitled real-time dialogue between experimenters and dreamers during REM sleep.

According to the paper, scientists have not yet fully explained dreams, and dreams are easy to be distorted and forgotten, which also challenges the related neuroscience research.

Based on this background, scientists try to carry out an experiment, so that people in lucid dreams can sense other people's questions, and then use electrophysiological signals to give answers.

Lucid dreaming, as the name suggests, is a strange physiological phenomenon that the dreamer can realize that he is dreaming. It is a kind of keeping conscious in sleep.

This concept was first proposed by a Dutch doctor, writer and psychiatrist named Frederick van Eeden. 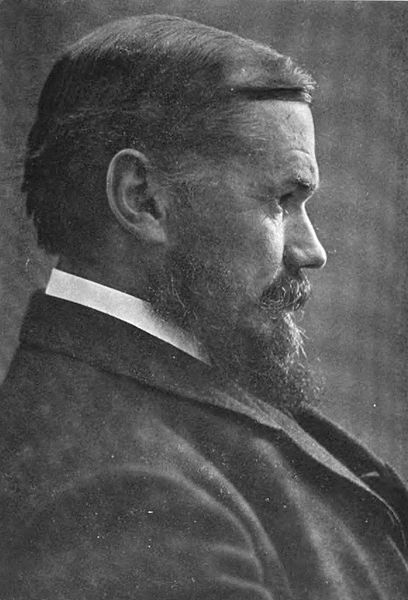 In 1880, Frederick van Eeden, 20, studied medicine in Amsterdam, where he pursued a bohemian lifestyle and began writing poetry.

Frederick van Eeden once said: the seventh dream is the most interesting, the most carefully observed, and the most worthy of study.

The reproduction of subconscious obsession, that is, when the brain has obsession with certain things, the dream will change from an unconscious chaotic state to a semi conscious state.

Nowadays, this word has become a classic term in dream literature and research.

As to why such experiments should be designed, the scientists said:

Instead of waiting for the dreamer to wake up and tell us about the dream, we try to get evidence that it is possible to talk to them while they are dreaming. Our goal is similar to finding a way to talk to an astronaut in another world, whose world is made up entirely of memories stored in his brain.

Answer questions from outside in dream

In medicine, there is a kind of EEG that can be used for sleep and dream research and the diagnosis of depression and sleep apnea syndrome, namely polysomnography (PSG), also known as sleep EEG.

Its working principle is roughly as follows: the biological signal is obtained by bioelectricity or sensing, and then the electrical signal is output by preamplifier to generate graphics for doctors to analyze.

As shown in the figure below, scientists have tried various ways of communication. 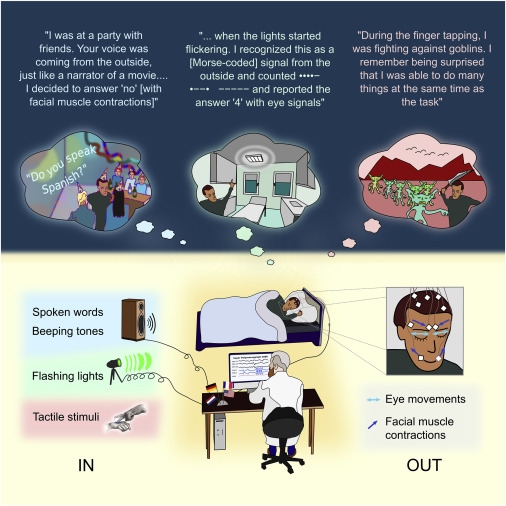 The figure below is from a 19-year-old American subject who said he had only experienced lucid dreams twice before.

One day, during a 90 minute nap, at the beginning of REM, the researcher asked him: what is 8 minus 6?

In the next three seconds, he responded with two left and right eye movements (lrlr), indicating that the answer was 2.

Then the scientists repeated the question, and he gave the right answer. 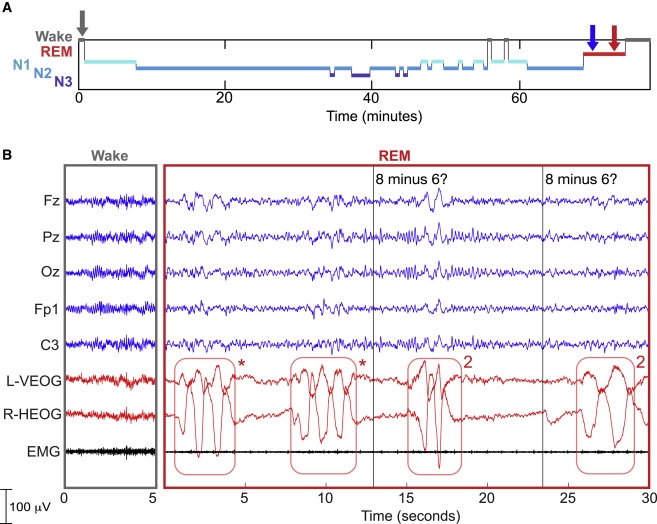 The data in the figure below comes from a 35 year old German subject who used to have lucid dreams.

During a night's REM sleep, researchers gave him visual stimulation composed of alternating colors, which exactly corresponds to the mathematical problem of Morse Code: what is 4 minus 0? 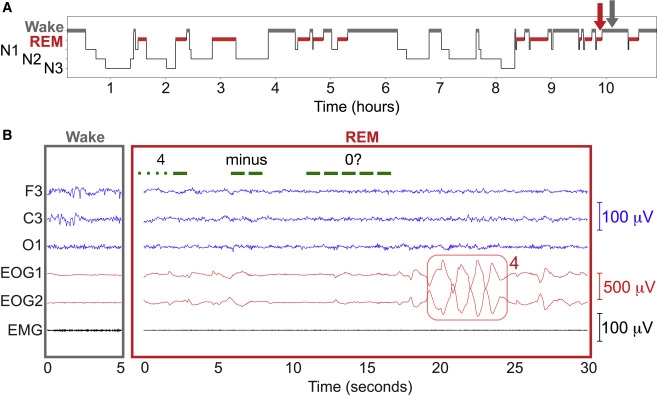 The data below is from a 20-year-old French subject who had frequent lucid dreams and had narcolepsy, a chronic sleep disorder of unknown origin.

Also in a daytime nap, when he entered REM state, the scientists asked a yes / no question, and he made a correct answer through facial muscle contraction. 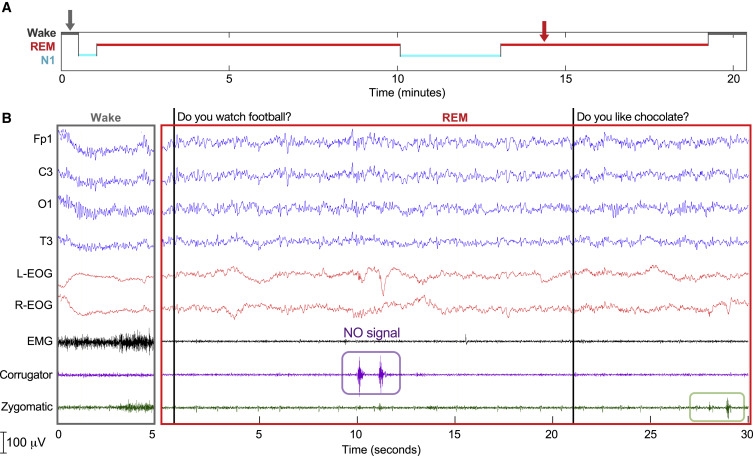 The last image is from a 26 year old Dutch subject.

During her 134 minute nap, she received auditory and visual cues, and finally answered two correct questions and three wrong questions. 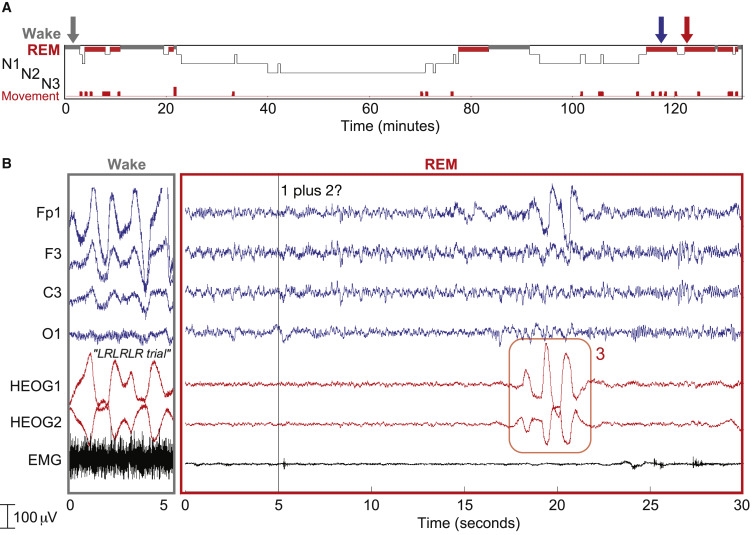 In general, scientists have noticed that even in rem stage, subjects can show a variety of abilities, including real perception and analysis of new information, maintenance of working memory information, simple number calculation and expression of volitional response.

It is worth mentioning that their answers are mainly as follows:Unique eye movement, selective facial muscle contraction.

Through repeated observation, scientists have finally proved that the phenomenological and cognitive characteristics of dreams can be asked in real time.

In the future, this relatively unexplored communication channel may realize a variety of practical applications, and provide a new strategy for the exploration of dreams.