Community group buying to the left, local retail to the right 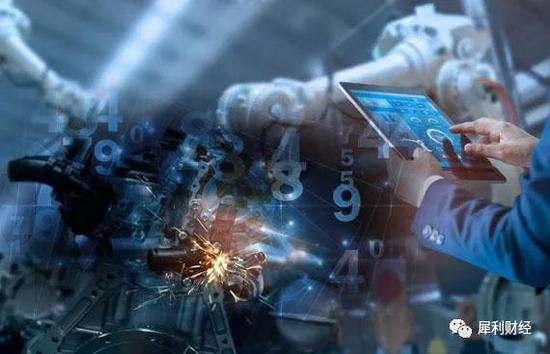 On the evening of April 1, an internal open letter from Dai Shan, partner of Alibaba group, attracted market attention.

On March 1, Alibaba set up the MMC business group, which was interpreted as a force in the community group buying market at that time. However, one month later, in an open letter, she said in a high-profile way: the MMC business group should focus on the digital upgrading of small stores, so that small stores can have stronger digital ability to serve the surrounding consumers and make the neighborhood more warm. Through the formation of real-time insight into consumer demand, the digital production of industrial belt, factory and agriculture can be realized.

Obviously, the digitization of offline real business is entering the end of capillary network. In this market, giants are pouring in, and a lot of funds and resources are pouring in.

In contrast, the development of many years of retail in the city, at this moment seems a little low-key. When Alibaba wants to seize millions of husband and wife stores, intra city retail has actually become the strategic highland of giant layout. 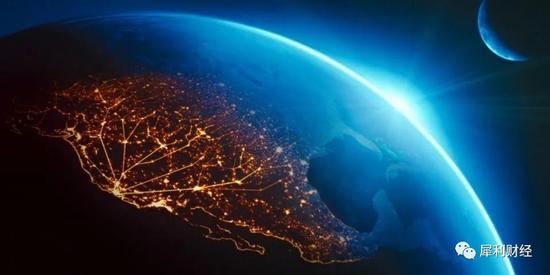 Retail e-commerce, after the development of the past 20 years, is going through a big change. This change will involve more offline real business.

When people, goods and markets are decentralized, how can the digitization of physical retail business be further accelerated? 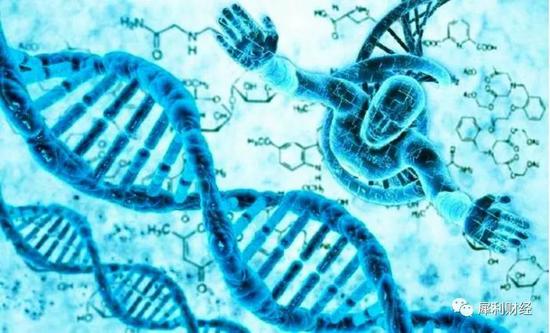 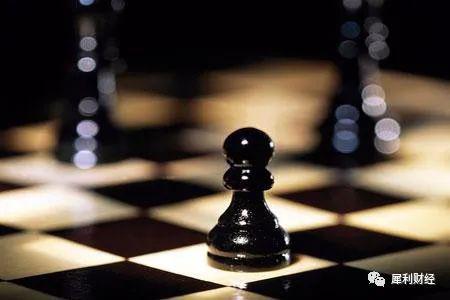 In the past few years, many offline physical businesses have launched their own apps, built their own channels, and tried to solve the problems of traffic and sales by means of technology. In the whole tide of mobile Internet, everyone has explored some ways. Now the stage of market education has been completed, the 1.0 exploration of real retail has ended, and digital genes need to be deeply integrated.

Head players, all in the digital Omni channel attack 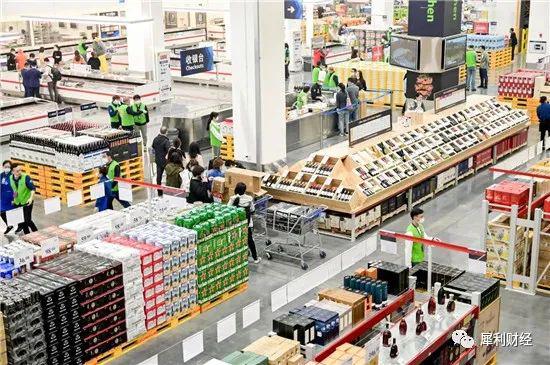 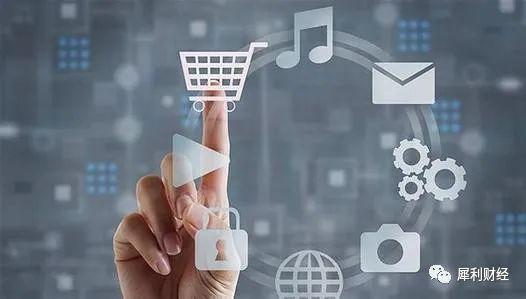 Data is the most powerful proof. In the case of digitalization, whether it is self built channels or external brain, physical retailers need a kind of wisdom to accelerate the evolution of their own ecology by conducting Omni channel operation through a third-party platform and improving their own digitalization ability.

In the process of digital accelerating ecological evolution, the replicable models of traditional retailers, brands and tripartite platforms are gradually coming to the surface. 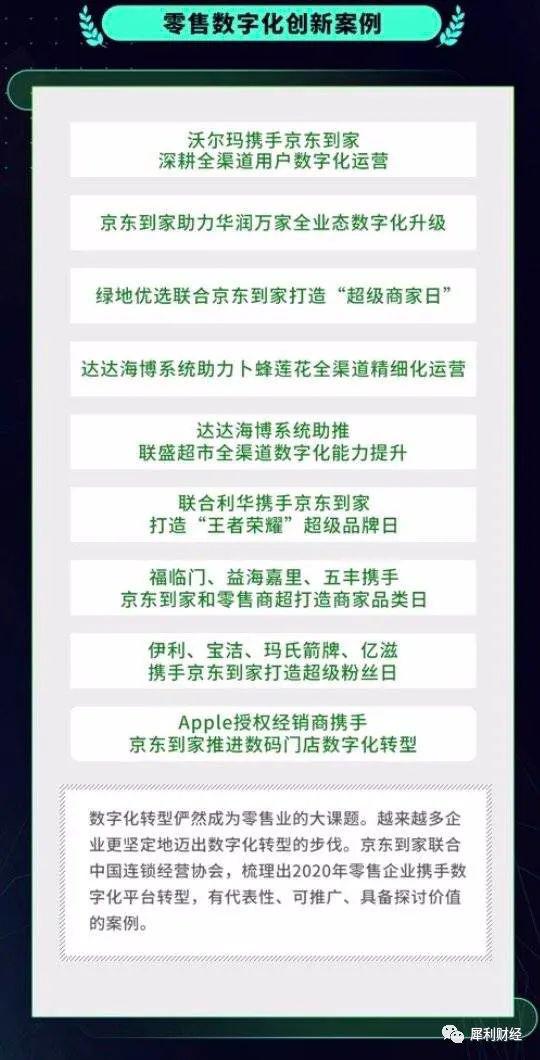 Two typical cases of innovation or play in the digital industry have enlightening significance.

In July 2019, Wal Mart cooperated with Jingdong home platform to launch Wal Mart's exclusive VIP project, which is the first online VIP operation experience of Wal Mart's hypermarket in China. During the Wal Mart 88 Omni channel shopping festival in 2020, Jingdong home and Wal Mart played a bold game: during the event, they launched VIP experience week. Users can open Vip through the experience price of 0.88 yuan, which is valid for 30 days.

VIP rights enjoyed by new member users include free shipping coupon, full discount coupon, VIP exclusive price goods, covering fresh, personal care cleaning, wojixian and other categories, including Wal Mart's own brand exclusive goods. In the future, if the number of orders is more than or equal to 4 within 30 days, the VIP rights and interests can exist free of charge.

What's the result? During the VIP experience week, the number of exclusive VIP users of Wal Mart surged to hundreds of thousands. At the same time, during the event, the consumption amount of Wal Mart VIP users was about 3 times higher than that of the whole business! 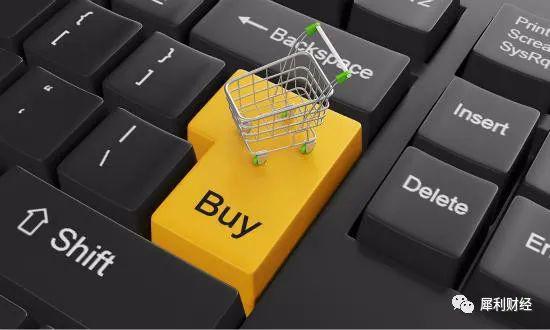 As of December 2020, the proportion of maternal and infant sales in the overall sales of vanguard boutique supermarket has increased to more than 30%. 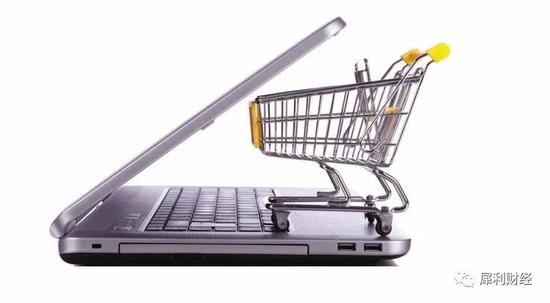 After 2020, looking at the digital process of traditional retail, it is no longer a multiple-choice question, but a question and answer question whether to adhere to the direct marketing or to cooperate with the tripartite home platform. From retail giants to regional chains, most retailers have voted with their feet. With strong strength, such as Wal Mart and China Resources Vanguard, they are vigorously developing direct business, and at the same time, they are cooperating with the leading three-party platform of digital capability such as Jingdong home. 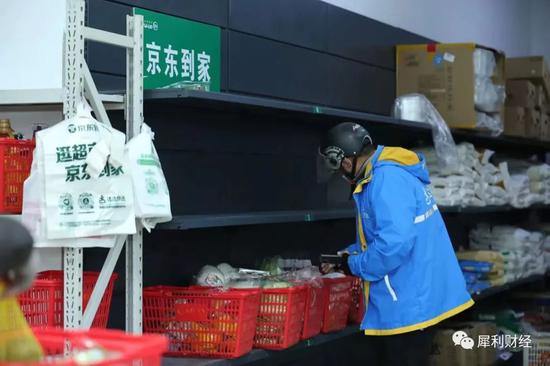 The demand of physical retailers for digital partners is also upgraded with the intensified competition in the same city and the digital process. They pay more attention to how the tripartite platform adapts to their own digital needs at this stage and provides accurate assistance.

The digitalization of retail in the same city of offline physical stores is entering the second stage. 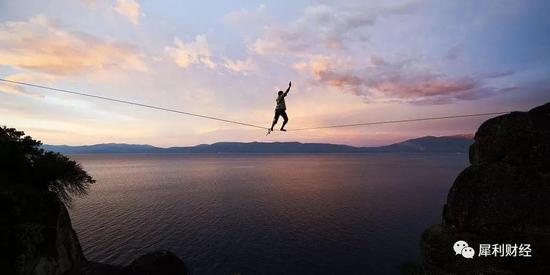 According to the Ministry of Commerce, in 2020, the online retail sales of physical goods in China will reach 9.8 trillion yuan, up 14.8% against the trend, accounting for 24.9% of the total retail sales of social consumer goods. China has become the largest online retail market in the world for eight consecutive years.

At the same time, a report predicts that in 2021, China will become the first country in the world where the retail sales of online e-commerce exceed that of offline entities, and the proportion of retail sales of e-commerce will rise to 52.1% unprecedented. Live broadcast, social e-commerce, etc. have become the elements of the continuous and accelerated development of China's e-commerce retail.

In this competition, how to realize real-time retail in the same city through refined operation and precipitation of users has become an important opportunity for all offline retail entities to carry out digital transformation and transformation development. 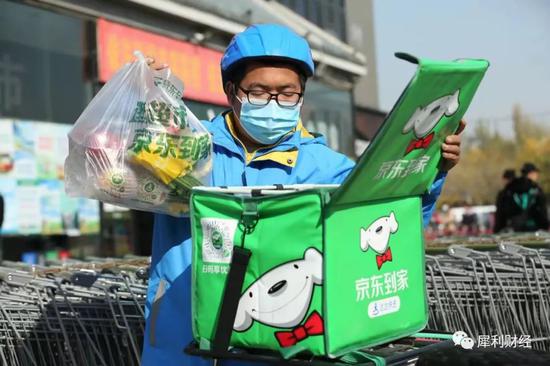 This real-time shopping Carnival involves not only the horizontal over 100000 entity businesses, but also the vertical penetration of 1400 counties and districts across the country. Under the background of the rise of virtual fire of group buying in community and the acceleration of digitalization of stores, the process and results of this big training may have important indicator significance. 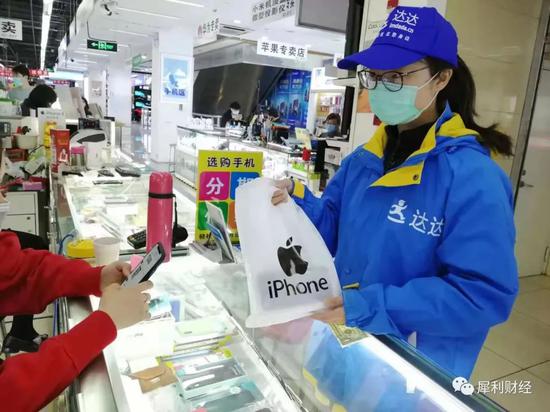 Peng Jianzhen said that with the continuous improvement of consumers' demand for personalized rights and service experience, how to revitalize stock users requires retailers to provide more refined and differentiated services than in the past, so as to enhance the stickiness, value and activity of stock users, which is not achieved overnight.

Related news
Open source Watch: copy left protocol ignored, loose license bullish
Hot news this week
The price of memory can't stop: supply is tight, DDR3 leads the rise at the end of the year
27 years ago, the security guard of Peking University self taught examination is now the president. Netizens call for perfect interpretation of knowledge and change of destiny
Alibaba: sincerely accept the punishment and resolutely obey. Today is a crucial day in the development of the company
2021 Hurun self made list of the richest people under 40: 38 year old Zhang Yiming ranks first in China
Tencent Teana laboratory holds a cross boundary Seminar on artificial hearing technology: cochlear implant technology is undergoing cross boundary development
Jilin University of business and technology notifies students of norovirus infection: the source of the virus is under urgent investigation
Ali Zhang Yong releases an internal letter: face the original intention of returning to China frankly
Dada's latest equity exposure: Jingdong is the major shareholder, and Kuai Jiaqi holds 7.8% of the shares
Shell equity exposure: Zuohui has 81% of the voting rights, and Tencent holds 5% of the shares of two shareholders, hillhood
Xiaomi donated to Tsinghua University to set up Xiaomi artificial intelligence Innovation Research Fund
The most popular news this week
There is still no speed limit, but it's still a pity that Alibaba cloud PC is the first to experience it
Microsoft opens edge's surfing games to other browsers
Has the box horse market settled in wechat and Taobao?
Huawei Mall: a new version of mobile phone without charger and data line has been launched, with the price reduced by 200 yuan
New coronavirus brings new harm: killing wild animals
Hisense helps Suning 418 Omni channel sales increase by 350%
Jingdong Logistics plans to go public at the end of April, sources said
IPhone 13 series HD CAD design: size unchanged, accessories can be universal
Man recovers woman's wechat record and spreads it by technical means: arrested for 6 days
IPhone 13 screen reconfirmed ltpo: support 120Hz, design exposure body size