In April, the major auto companies adopted different production and sales strategies, so there were some new changes in the monthly sales list.

In terms of ranking,Wuling Hongguang Mini EV is firmly at the top of the list, with its sales volume reaching 26592 vehicles in April, and the cumulative sales volume from January to April is nearly 100000 vehicles, far ahead of other vehicles.

It is worth noting that previously, it was reported that Wuling Hongguang Mini EV could not be licensed in Shanghai because the length of the car was not more than 4.6 meters and the price was not more than 100000 yuan. However, the news has not been officially confirmed.

In addition, other brands,BYD Han EV, Chery EQ, ideal one and EA s all sell more than 5000 vehicles, and they are all domestic independent brands.The specific ranking is as follows: 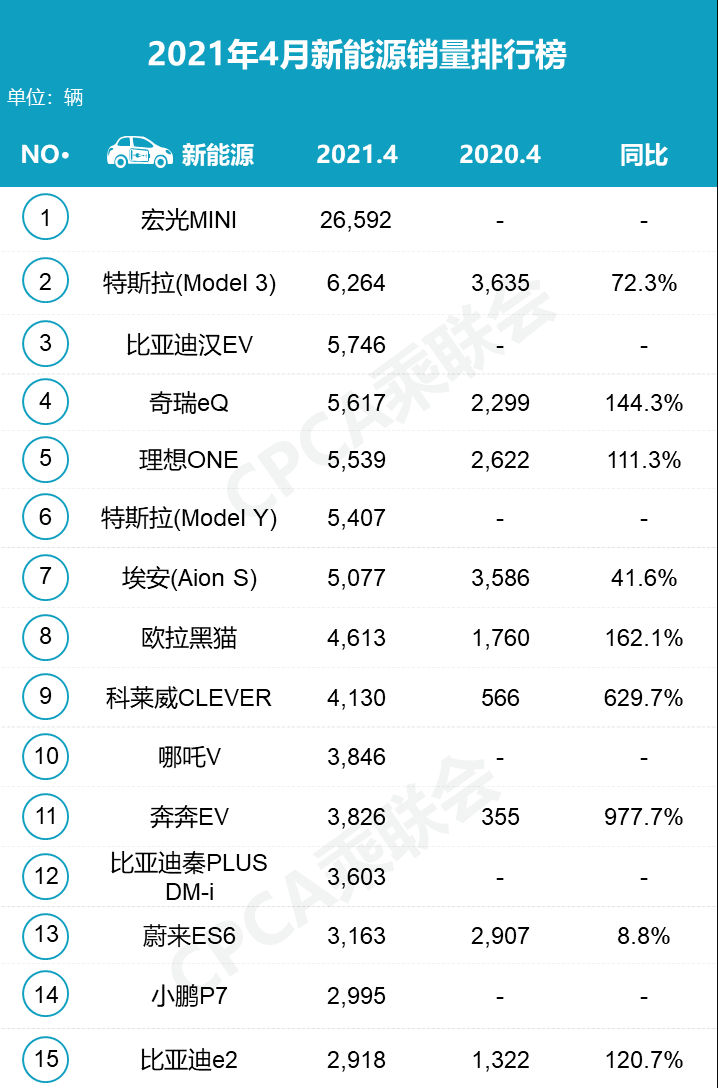 Related news
13 years of history NVIDIA gave up Tesla brand in a low-key way: name collision with electric vehicles
NVIDIA classic computing card series Tesla to be renamed: too confusing with Tesla
Hot news this week
The company announced the shipment data of 2021 Q1: the proportion of Huawei fell to the sixth place in the world at 4%
Huawei Hongmeng cross border stir financial industry, many banks and insurance institutions enter, so much imagination!
Many mobile phone users make complaints about 5G Zhang Guoquan: all mobile phones in China open 5G SA by default.
Sony's third generation noise reduction experience: comparable to the strongest combat power of real wireless noise reduction headphones
The most flagship Huawei watch is back! Huawei watch 3 Evaluation: full marks of harmonic OS function and endurance
News said the ipad Mini and iPad 10.2 ushered in a new design: Apple's latest launch before the end of the year
IPhone 13 Pro comes with the same model! Xiaomi 12 information exposure: equipped with ltpo adaptive high swipe screen
At 19:00 on June 9, Ma Weidu and Mai Jingdong enjoy a 50% discount on books purchased in the live studio of Shusheng shushuo
Henan satellite TV "Dragon Boat Festival wonderful tour" full version popular all over the network: netizens call content amazing
New people to do "new" business: preparing for the battle with Zhang Ying, a peach farmer in Yangshan
The most popular news this week
Accidentally, the second-hand iPad I bought on a certain platform overturned
QQ new expression "big dish Wang" dominates the screen: no matter how big the mobile phone screen is, it will never be blurred
Real book official announcement: a bit of apple flavor
Fluorite releases RK2 pro, a child care robot: can run and shake hands
Buy a Hedwig in Jingdong and you can enter Hogwarts? Jingdong 618 takes you to explore!
"To prevent brake failure, please overtake first"! Buick car stickers at the end of the car, but Tesla owners are crazy to leave the car
Microsoft colorful mouse camouflage layout reward: 179 yuan, 12 months for a battery
Jingdong 618 hard core E-sports good things straight down also enjoy super long interest free rush on the right
The red envelope returned by the couple after breaking up was rejected Court: wechat red envelope is a gift, not returned
Jingdong 618 enters the climax period, issue 10% off household appliance consumption coupon again, and enjoy the "bottom price" of the whole network!