On June 11,Tesla officially delivered model s Plaid at the Fremont super factory in California. The new car adopts three motor all wheel drive, and it only takes 2.1S to accelerate one hundred kilometers. It is the fastest mass production car in the world at this stage.

Interestingly, Tesla official micro released a paragraph of what musk said. It said that the model s Plaid version has been greatly improved and improved. We have broken the record of 2 seconds. Before that, no mass production car can squeeze 0-60 miles of acceleration into 2 seconds.It's also a five seater sedan, all wheel drive, and it's breaking the record in physics.

Compared with the ordinary model, the appearance of the new car has little change, only the details have been adjusted. For example, the bright chrome plating of door handles and tail decorative strips are replaced with matte and blackened materials.

In addition, the new car also added a small tail, the overall sense of motion is stronger.

As the top version of model s,The model s Plaid version adopts three motor all wheel drive. The officially announced acceleration of 0-100km / h is only 2.1 seconds (minus one foot starting time), the maximum speed can reach 322km / h, and the range can reach 628km (presumably measured by EPA standard).

It is worth mentioning that,The new model s Plaid's quarter mile race results are 9.247 seconds, with a top speed of 152.09 mph; The previous record holder was Bugatti, who finished in 9.4 seconds at 158 mph. 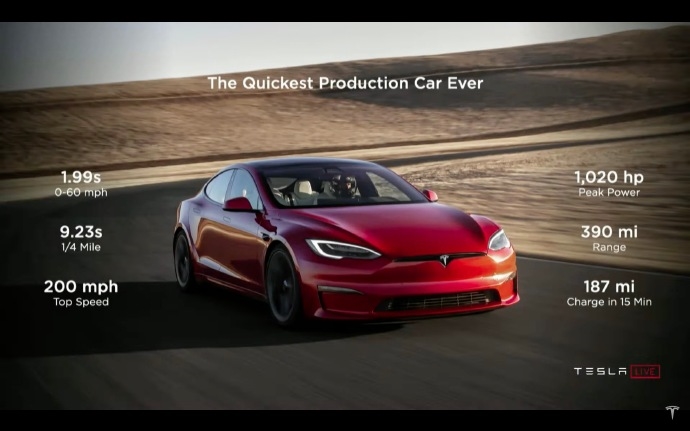