Search and rescue stopped in US building collapse accident: one living person was not rescued and 86 people are still missing

In the early hours of June 24 local time, a 12 story apartment building in Miami, Florida, collapsed in part. 55 of the 136 houses were damaged in the collapse, causing heavy casualties. However, the slow and inefficient rescue work was questioned and criticized by all parties.

On July 7 local time, assistant director of the Miami Dade County Fire and rescue team, jadala, announced that,The search and rescue operation stopped in the afternoon of the same day, and the focus of work will turn to the restoration and reconstruction of the ruins.

The FEMA search and rescue team has also agreed to the decision.

As of the evening of the 7th,The death toll rose to 54, while 86 people are still missing.

Jadara pointed out that,Based on the existing facts, the survival probability of the missing in the ruins is zero.

Next, the staff will remove the rescue dogs and monitoring equipment, but will continue to search for the remains of the missing person.

The transition from relief to reconstruction is a very difficult decision.

According to the US media,One hour after the collapse, no survivors have been rescuedOnly one woman's voice was heard on the morning of the first day, but rescue workers were unable to contact her, and no one's voice has been heard since.

In the rescue process, the rescue workers have twice suspended the search and rescue operations because of the safety factors of the rest of the building. 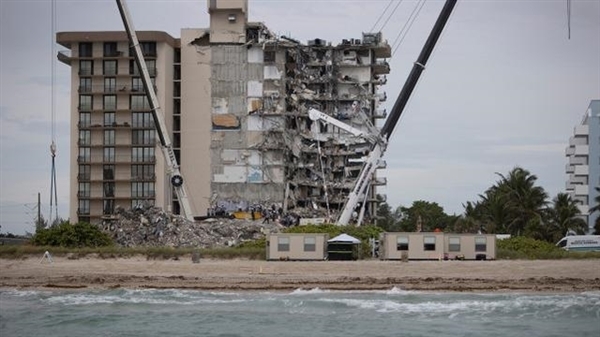 Related news
Why is Facebook's mysterious hardware department Building 8 dissolved? Foreign media in-depth report (Figure)
Collapse OS is an open source operating system designed for the dark ages of the human world
Amazon launches Kendra enterprise search service to call Microsoft Search
Google AR AI visual world cultural heritage microbeauty hologram (WIMI.US) digital display PK traditional model
Search and rescue stopped in US building collapse accident: one living person was not rescued and 86 people are still missing
Hot news this week
Performance exploration of Apple A15 processor: CPU standing still compared with A14 and GPU increased by 38%
Tencent announced that WeChat open external chain declaration followed the four principles started to execute on September 17
IPhone 13 dominates the hot search list experts: there are no hammers like apple that cause widespread discussion for free
Huawei matebook's new product is equipped with windows upgraded version of Huawei application market and supports running mobile applications
Jingdong health "National Health season" is about to open. The Mid Autumn Festival gift is as low as 50% off and 20% off every 200
Jingdong opened its first super body store in Indonesia, making "China service" as loud as "made in China"
Netease cloud music released a new "villager card" to strengthen user identity and deepen the attribute of cloud village community
The host roasted and ate a pet pig that had been kept for 100 days and came back to life in less than 10 days
Jingdong sports outdoor super product day massive discounts come to see Bao Chunlai and Kan Meng interpret the new way of live broadcasting
Netease game three prevention, three treatment and two special actions were fully launched to protect the healthy growth of minors
The most popular news this week
The first round of iPhone 13 opened apple market value evaporated by 300 billion yuan overnight
Early FENG: Apple releases the first beta/macOS Monterey Beta 7 release of iOS 15.1
In addition to getting started ‌iPad‌ and iPod Touch Apple is close to phasing out the headphone jack on iOS devices
Facebook announces portal Go to punch iPad, kick Amazon Alexa?
Apple: Macos Monterey needs Xcode 13
Apple turns off iOS 14.7.1 authentication to not allow users to degrade
The first beta version of iOS 15.1 was quickly released after the official release of iOS 15
Private spaceflight grows As NASA reorganizes manned space operations to focus on missions to the moon and Mars
Plot independence! DeepMind was already deeply distrustful of Google
Zachberg personally approves Facebook being burst into the company's front news