In these six hours of the Facebook, the public opinion was inherent. What happened to cause so large-scale failure? In many guess, there are accounts to invoke the so-called foreign media on overseas social platforms. This is all 13-year-old Chinese small hackers called Sun Jisu; masterpieces & rdquo; and account upload so-called Photo of Sun Jisu.

According to 湃 report,After verification & ldquo; 13-year-old hacker capture face book & rdquo; one said that there is a son virtualus, many Asian netizens said that the name of Sun Jisu sounds more like a Korean. 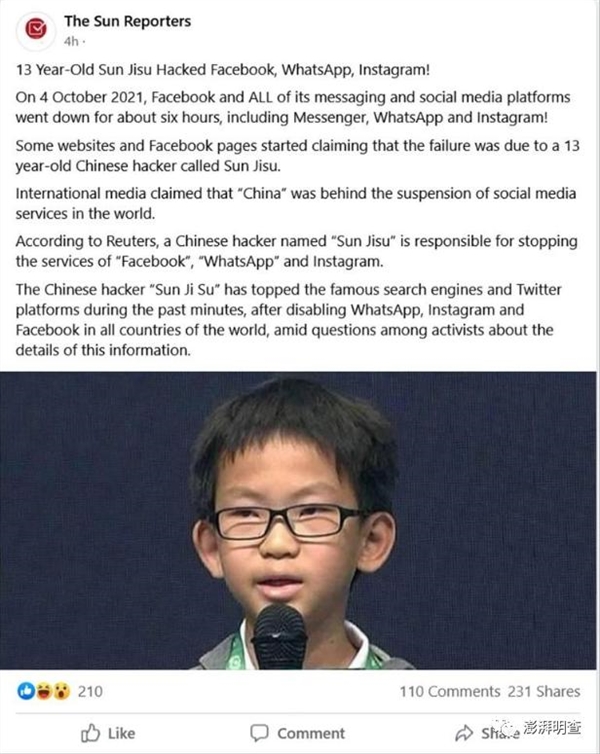 By searching for the website tineye, the photo can be found, as early as 2014, this & ldquo; small hacker & rdquo; if you have no small movement, just what is not Sun Jisu, but called Wang Zhengyang.

Wang Zhengyang, 12 years old, is reading in Tsinghua University, although the age is still small, but it is very interested in programming, and has learned a nearly five-year network security technology. On April 27, 2014, the establishment ceremony of Beijing Network Security Education Base was held at 360 corporate headquarters, and Wang Zhengyang submitted a security vulnerability in the 360 company's website. At that time, 360 companies were still on the official Weibo. I praised him.

At the 2nd Internet Security Conference held in September of the same year, Wang Zhengyang was also invited to attend and shared their own growth experience. According to the on-site picture of the at the time, ISC words on the microphone and 360 company icon can be seen, so-called & ldquo; 13-year-old Chinese hacker Sun Jisu & rdquo; photo, is the scene of Wang Zhengyang speaking at this conference.

After the service recovery on October 4, Santoshi Janardhan, vice president of Facebook's infrastructure, Dianant, issued a statement that the root of this fault lies in routine maintenance work, It is this instruction that causes the DNS server to configure the fault, cut off the network connection between the Face Bone Network and the Data Center.

As for the boiled hacker attack, Facebook also clarified and nothing in the statement. 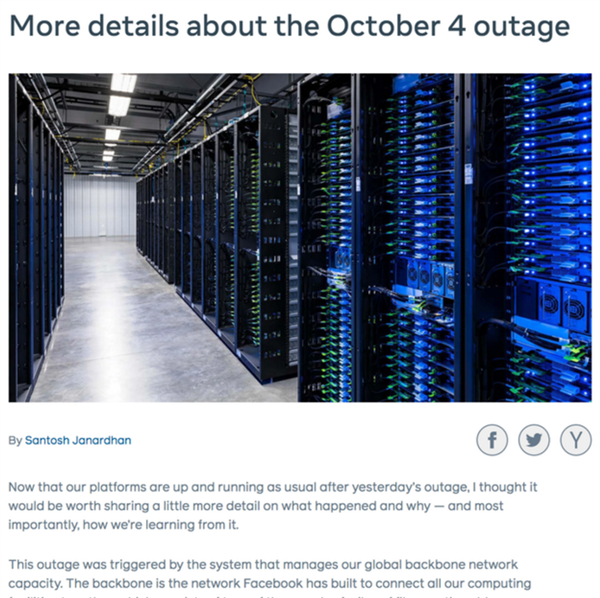 Related news
Foreign Ministry's response to India's ban on Chinese app: China's strong concern
India has banned 59 popular Chinese apps, but Indian chicken eaters are relieved
After 267 Chinese apps were banned, Indian netizens still couldn't put down chicken eating games
The English name of Chinese liquor has been changed: Chinese Baijiu has been officially launched
13-year-old Chinese hacker capture a big Bune APP 3.5 billion users were sentenced: official response
Hot news this week
Apple store staff committed suicide due to work pressure?
Xiaomi has issued a patent for autonomous driving, which can automatically adjust its driving ability according to the road class
U.S. inflation blasts Nearly half of households aim to live: the price of the commodity has gone up outrageously
Jiangsu Bank's Beijing branch was fined 4.9 million for "seven crimes" involving the illegal issuance of loans
Huawei has released a patent on the packaging structure that solves the problem of black spots on display panels
More than 20,000 domestic Model Y "broken shaft" recalls Tesla's ability to dump pots surprised netizens
Alipay announces automatic identification of automatic identification of vehicles to enhance the quality of drivers
Browser Search Engine Giants Quasi-Upgrade Microsoft to issue an unsafe warning to 2 billion Chrome users
Could new SEC rules prevent Chinese companies from listing in the US? The Foreign Ministry responded: firmly opposed
The U.S. blocked Avista's acquisition of chip giant ARM, fearing it would hurt competition and neutrality
The most popular news this week
AMD YES! Musk praises Tesla's 'Witcher 3'
Standard Snapdragon 8 Gen1! Exposure millet 12 Pro released this month: screen specifications are higher
A Japanese billionaire has flown to the International Space Station on the most expensive charter flight in history
US group public bag app: system network abnormal recovery rider can be delivered normally
Visa CFO: The company can solve the problem with Amazon, and the relationship will resume as it did
Yumei Technology responds to employees: there is cash compensation and option compensation, and the company operates normally.
Abandon ARM! Huawei's all-self-research chip announced: new architecture CPU plus holding
It is 200 million to learn Tesla Volkswagen will be involved in clean energy construction.
TNGA + hybrid! Toyota's flagship Sedan in China looks a lot like a Lexus
Liang Jianzhang: The real universe will certainly prevail over the meta-universe, which may bring population risks and technological stagnation