Another overtime route? Tencent announced that employee dinner was free and that it would be reimbursed for taxis after 10 p.m 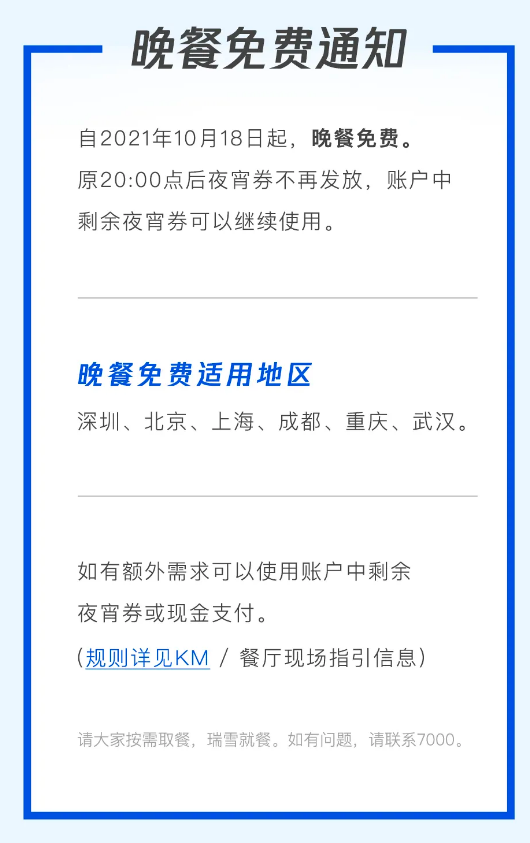 On October 15, Tencent's administrative service information wechat query platform, Tencent Administration, issued a notice stating that dinner will be free from October 18, 2021. The original night tickets will no longer be issued after 20:00 and the remaining night tickets in the account can continue to be used. Dinner is free of charge in Shenzhen, Beijing, Shanghai, Chengdu, Chongqing and Wuhan.

Previously, Tencent employees could get an $18 night ticket by swiping at 8 p.m. at any place with access. Night tickets can be used for evening consumption in the company's canteens, as well as in restaurants around the company that work with Tencent's employee packages (restaurants such as KFC, McDonald's and Shenzhen Rice Havesam have signed up with Tencent to offer staff packages).

In November 2017, Tencent Executives issued a system of free breakfast and dinner vouchers for employees, and if they spend the day at the company, they only pay for lunch.

Tencent's benefits in areas such as catering and shuttles were once seen as "overtime". Some people have posted that Tencent this "wonderful" company 5:30 off work, 6:30 there is a shuttle bus, 8 o'clock can get a night ticket, after 10 o'clock taxi reimbursement. But later, Tencent responded that it promoted flexible working and that the vast majority of departments did not "clock in and out of work hours." (| AI Finance News Agency Zhao Wei)

Related news
A GREAT SPELLCASTER THAT BRING BACK EX LOVER
A GREAT SPELL CASTER THAT SAVE MY MARRIAGE
Love Spells That Work for Real +27836633417
Another overtime route? Tencent announced that employee dinner was free and that it would be reimbursed for taxis after 10 p.m
Byte fired the first shot "anti-overtime", will be the Internet anti-introversion of the key step?
Hot news this week
Apple store staff committed suicide due to work pressure?
Xiaomi has issued a patent for autonomous driving, which can automatically adjust its driving ability according to the road class
U.S. inflation blasts Nearly half of households aim to live: the price of the commodity has gone up outrageously
Jiangsu Bank's Beijing branch was fined 4.9 million for "seven crimes" involving the illegal issuance of loans
Huawei has released a patent on the packaging structure that solves the problem of black spots on display panels
More than 20,000 domestic Model Y "broken shaft" recalls Tesla's ability to dump pots surprised netizens
Alipay announces automatic identification of automatic identification of vehicles to enhance the quality of drivers
Browser Search Engine Giants Quasi-Upgrade Microsoft to issue an unsafe warning to 2 billion Chrome users
Could new SEC rules prevent Chinese companies from listing in the US? The Foreign Ministry responded: firmly opposed
The U.S. blocked Avista's acquisition of chip giant ARM, fearing it would hurt competition and neutrality
The most popular news this week
AMD YES! Musk praises Tesla's 'Witcher 3'
Standard Snapdragon 8 Gen1! Exposure millet 12 Pro released this month: screen specifications are higher
A Japanese billionaire has flown to the International Space Station on the most expensive charter flight in history
US group public bag app: system network abnormal recovery rider can be delivered normally
Visa CFO: The company can solve the problem with Amazon, and the relationship will resume as it did
Yumei Technology responds to employees: there is cash compensation and option compensation, and the company operates normally.
Abandon ARM! Huawei's all-self-research chip announced: new architecture CPU plus holding
It is 200 million to learn Tesla Volkswagen will be involved in clean energy construction.
TNGA + hybrid! Toyota's flagship Sedan in China looks a lot like a Lexus
Liang Jianzhang: The real universe will certainly prevail over the meta-universe, which may bring population risks and technological stagnation