It is understood that the dragon lizard operating system is positioned in the server market, supports multiple hardware architectures and calculation scenarios such as X86, ARM.

It has made multiple optimizations for cloud primary application development. The comprehensive performance of typical scenes on the cloud can be increased by 40%, while the failure rate can be reduced by 50%, and it is also compatible with CentOS ecology, supports a key migration, and provides full stack of national power.

The dragon lizard is fully open source, providing services in the form of open source communities and operating system manufacturers, technical support for at least 10 years.

In the future, Alibaba Cloud plans to invest 2 billion yuan for special funds for the dragon lizard system, and jointly promote the construction of ecological construction.

In fact, the dragon lizard is not a fresh thing, just the first announcement, it has grinded 10 years in Alibaba, especially the effective support of Tmall Double 11 activities, performance and stability in the years. I have a harsh test.

In addition, the Alifecta Operating System Laboratory was initially established, and the future will focus on the development and promotion of the operating system. 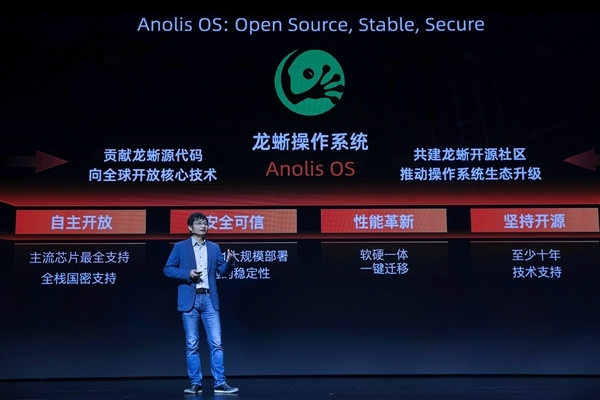 Related news
Huawei accelerates the scale of commercial use of Cloud VR This year's target of 100,000 users
How much is Google Cloud worth?
Huawei Cloud Major Change: Cloud
NASA astronauts revealed that they made a "prank call" after returning to earth on crew dragon
Hot news this week
Apple store staff committed suicide due to work pressure?
Xiaomi has issued a patent for autonomous driving, which can automatically adjust its driving ability according to the road class
Jiangsu Bank's Beijing branch was fined 4.9 million for "seven crimes" involving the illegal issuance of loans
U.S. inflation blasts Nearly half of households aim to live: the price of the commodity has gone up outrageously
Huawei has released a patent on the packaging structure that solves the problem of black spots on display panels
More than 20,000 domestic Model Y "broken shaft" recalls Tesla's ability to dump pots surprised netizens
Alipay announces automatic identification of automatic identification of vehicles to enhance the quality of drivers
Browser Search Engine Giants Quasi-Upgrade Microsoft to issue an unsafe warning to 2 billion Chrome users
Could new SEC rules prevent Chinese companies from listing in the US? The Foreign Ministry responded: firmly opposed
The U.S. blocked Avista's acquisition of chip giant ARM, fearing it would hurt competition and neutrality
The most popular news this week
US group public bag app: system network abnormal recovery rider can be delivered normally
Visa CFO: The company can solve the problem with Amazon, and the relationship will resume as it did
Yumei Technology responds to employees: there is cash compensation and option compensation, and the company operates normally.
Abandon ARM! Huawei's all-self-research chip announced: new architecture CPU plus holding
It is 200 million to learn Tesla Volkswagen will be involved in clean energy construction.
TNGA + hybrid! Toyota's flagship Sedan in China looks a lot like a Lexus
Liang Jianzhang: The real universe will certainly prevail over the meta-universe, which may bring population risks and technological stagnation
Google Chrome now supports scrolling screenshots on Android 12 phones
SONY's Employee Innovation Competition in China is on display for the first time: here is the source of "black technology"
Huawei new PC processor "Pangu" exposure! Alternative Intel / AMD