It is understood that the Gordon Bell Prize is established in 1987, which is the highest academic award in the field of international high-performance computing applications, known as the "Nobel Award" in the superior field, mainly issued to high performance applications. The most outstanding achievements in the field are selected and issued by ACMs and have a large international influence. The winners will receive a $ 10,000 bonus by HPC Pioneer Gordon Bell.

"With the" Quantum Hegemony "declaration published by Google in 2019, the Sycamore superconductive quantum computer is more than 100 billion times higher than Summit, the strange dawn begins to start with a more active way," researchers wrote, "IBM research The team later responded that they can complete the simulation on the classic Summit Supercomputer ... is within a few days, not 10,000 years. " 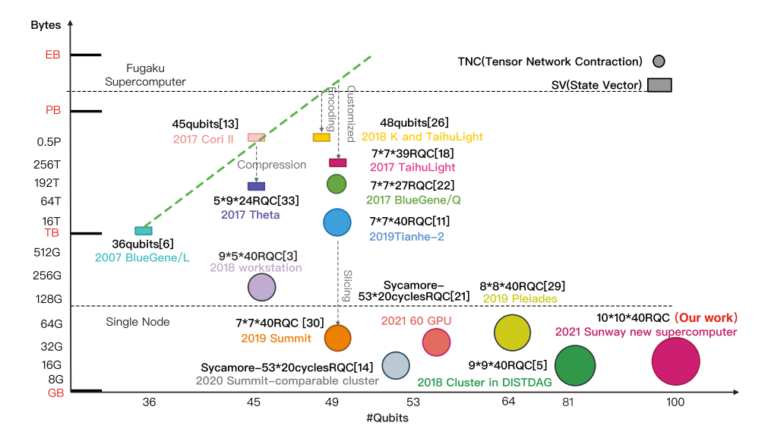 While the quantum simulation studies receive award, other five nominated representatives represent the most in-depth study of some of the most urgent research applications in the world.

Up to 67 researchers participated in this study, eventually developed a special Anton 3 molecular dynamics supercomputer designed and built by D. E. Shaw. The researchers report that Anton 3 can simulate a million atoms at 512 nodes at a speed of 100 microseconds per day, and each simulated 1 microsecond energy is less than any other machine. To achieve this, they have implemented a series of architectural and algorithm improvements, including a new custom network, specialized pair interaction with different precision, and a "Manhattan Method" for solving non-bound interactions. new method.

& middot; "FuGaku" 400 trillion grid on the supercoming computer: large-scale distribution in the middle micron in the six-dimensional phase space

The researchers combine the N-body simulation of the cold-dark substance by massive simulation of micros in the remains of the universe. Their maximum simulation spans the calculations of 4 million grids and 330 billion days. The node showed a weak scale of up to 96% and up to 93% of the strong scale.

This study also used the new Shenwei Billion billion system to push the Raman spectrum-a structural fingerprint to a new limit. More than a dozen researchers from China explained that "Raman spectroscopy provides chemical and component information, which can be used as structural fingerprints of various materials. Therefore, the simulation of Raman spectroscopy, including quantum perturbation analysis and basic calculation It is of great significance. "The full-quantum mechanical simulation of the Raman spectrum of biological materials has been proven to be particularly difficult, here, the researchers have conducted" fast, accurate, large-scale parallel real biological system Raman Spectroscopy full-scale calculation simulation " Up to 3006 atoms, double precision reached 468.5 petaflops, mixed half precision reached 813.7 petaflops, which indicates the "QM method in biological system new application potential".

These researchers observed the BC8 phase of carbon "long-term search" at extreme pressure and extreme temperatures. To this end, they run on the US Leadership Summit system, command 4,650 nodes within 24, and show "SNAP [Molecular Dynamics] unprecedented extensibility and unparalleled real world performance". On behalf of the simulation of physical time nanoseconds, the simulation achieved more than 97% of parallel efficiency and the peak computing capacity of 50 Petaflops, which was used for 20 billion atomic molecular dynamics simulations on nearly 28,000 GPUs across SUMMIT. The researchers said that this record is 6.2 million atomic steps / nodes, which is 22.9 times the previous record.

Related news
T-Mobile and American restaurant chain Taco Bell hold T-MoBell promotion
Glory high-tech products help team China's national team set out to show China's business card to the world
Heavy weight! China team "100 billion-level super-calculated simulation quantum" won two nominations in Gordon Bell Prize
Hot news this week
China has found 35 known cases of the new zoonotic virus Langya
Losses in a single quarter of $ 23.4 billion a record, SoftBank did not carry the plunge of technology stocks and the devaluation of the yen
The prevention and control of the American Monkey epidemic has failed. What should I pay attention to?
Is the micro -business headache? WeChat friends are suspected to have a big move: 7 can only be posted a week
Kuaishou launched a self-developed cloud intelligent video processing chip: The chip has been streamed successfully
The new product of Xiaomi MIX is coming: both internal and external dual -screen has been upgraded to make up for the previous generation.
A new zoonotic virus, Langya, found in China has not yet been confirmed to be transmitted from person to person
Ministry of Public Security: Single telecommunications network fraud continues to cause 40 % of all electrical fraud cases
Special price "kill ripe"? Bike-sharing platforms have different prices for the same package for different users
A tech company in Shanghai has been fined 220,000 yuan for swiping orders to improve its ranking on Yelp
The most popular news this week
Yuyuki Kobayashi joins NetEase game! He worked on Devil May Cry 4 and Resident Evil 4.
Cyber violence governance needs the concerted efforts of all sectors of society
WeChat releases a new specification for the public account avatar setting, and the official news reminder is prohibited
After the U.S. chip bill takes effect, the manufacturer's snatching subsidy war is even more intense
Thousands of flights in the United States are delayed or canceled: User collapse extreme weather is frequent
Off the shelves one after another! The Sogou search App followed in the footsteps of Sogou Map
Xiaomi MIX flagship top with price reduction: consistent with the price of 12S Ultra
Semiconductor industry burst! Us Orders' Mother of All Chips' banned
Tesla suddenly accelerated out of control into a wall tragic: the owner of the right pedal and drive assistance
Lei Jun was splashed with cold water