IT Home November 26 news, according to the Beijing Internet Court Cash back "card? Mr. Liu also received the "praise cashback" card of the merchant, and believed that there was a praise from the "fictional" praise to the court. 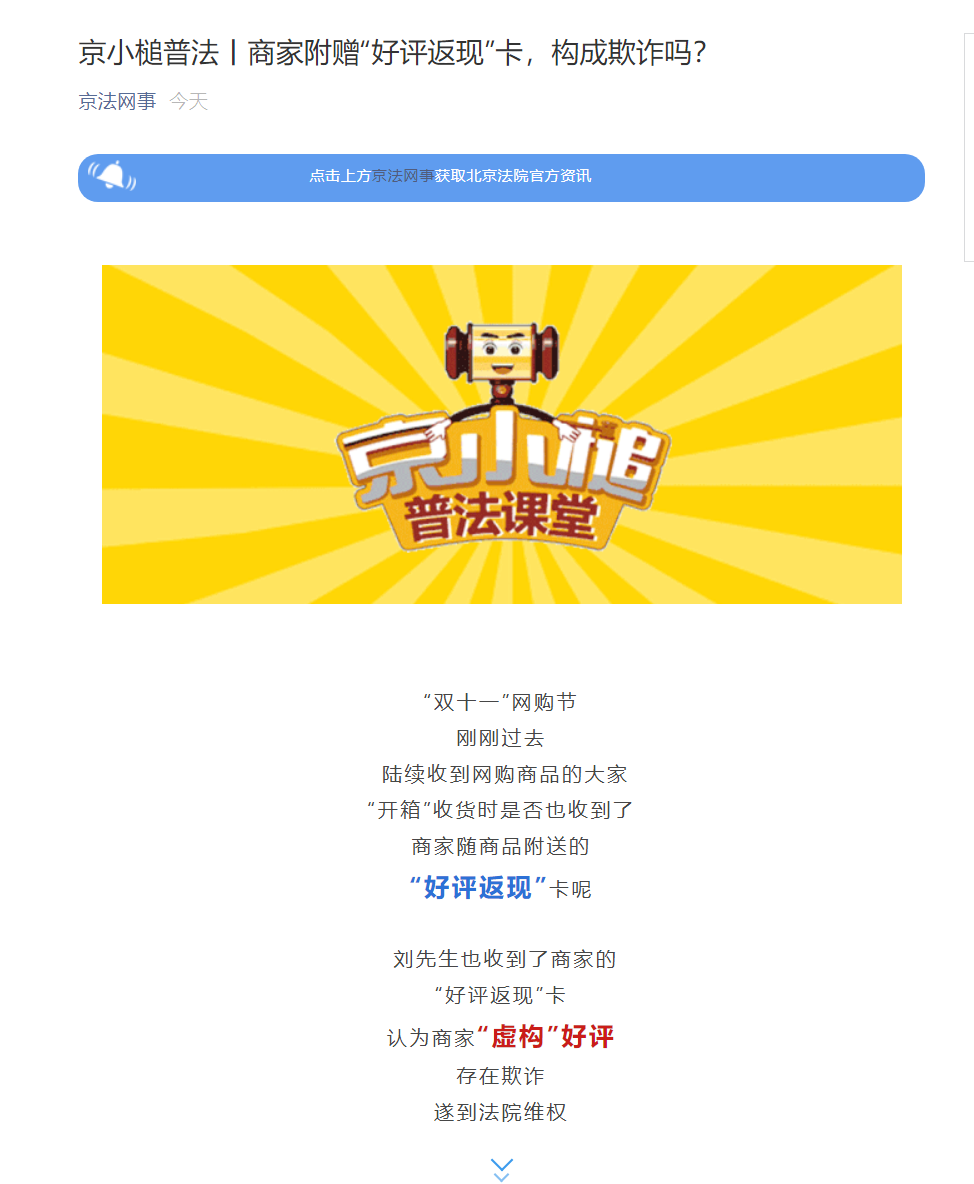 Mr. Liu browses a product through the e-commerce platform. Seeing the commentary is praised, if the tide is purchased, it is seriously not worthy of physical objects and commodity promotion pages after receiving the goods. There is also a small sheet of paper in the package. He has written a few big words "praise cash back". Mr. Liu immediately contact customer service. The cash back of 5 yuan can be obtained according to the evaluation provided by the graphic provided. Mr. Liu suddenly realized that the merchants have fraudulent behaviors, and they resorted to the court to the court, requiring it to return their shopping funds and advocated triple punishment.

The defendant argued that the propaganda pictures in the commodity promotion page are store physical products, but they have taken certain professional shooting techniques without fraud. "Request Cashback" is encouragement as a cash reward, does not force consumers to conduct praise, and the evaluation content is voluntary after consumers.

The composition of fraud must have the following four conditions: First, fraud, the second is fraud, the third is caused by fraud, and the fourth is the meaning of the mistake. In this case, the praised content and photos provided to the plaintiff submitted by the plaintiff submitted to the customer service, which can be clearly seen that the text describes part of the content, statement, and the artistic example. The shooting technique is basically the same, thereby improving the comments in the commodity promotion page. The defendant uses the "praise cash back" to induce consumers with its preparation pictures and text published praise in the comment area, and to mislead the follow-up consumer's judgment of the quality of the goods involved. Although the defendant argued that the cash reward is only encouraged to have forced, it has affected the authenticity and voluntaryness of the comments to a certain extent by cash reward. The court believes that the defendant is subjectively dealing with fraud, objectively implemented fraud. The plaintiff is based on the "fictional" praise to generate misunderstandings, and then make the meaning of buying goods, there is a causal relationship between the fraudulent behavior of the merchant and its mistakes.

According to Article 55 of the Control Law of the People's Republic of China, the court shall support the returning commodity price of the plaintiff and the payment penalty compensation claims.

Nowadays, online shopping has become one of the ways to buy daily necessities. In order to click quantity, sales, adoption of "praise cash back", the merchant will result in the realism of evaluation, and the consequences of subsequent consumers have misleading. Then constitute fraud, and the weight may constitute an unfair competition for similar operators. Merchants should follow the law, will spend more energy in improving product quality, rather than using "praise cash back" and other speculative behavior. At the same time, remind consumers, maintain basic judgment in online shopping, goods than three, rational consumption.

Related news
Internet Archive: recording the forgotten Internet
China Vows Full Carbon Neutralization for Beijing Winter Olympics
Beijing Internet Court: The merchant comes with "Review Cashback" card can constitute fraud
Hot news this week
China has found 35 known cases of the new zoonotic virus Langya
Losses in a single quarter of $ 23.4 billion a record, SoftBank did not carry the plunge of technology stocks and the devaluation of the yen
The prevention and control of the American Monkey epidemic has failed. What should I pay attention to?
Is the micro -business headache? WeChat friends are suspected to have a big move: 7 can only be posted a week
Kuaishou launched a self-developed cloud intelligent video processing chip: The chip has been streamed successfully
The new product of Xiaomi MIX is coming: both internal and external dual -screen has been upgraded to make up for the previous generation.
A new zoonotic virus, Langya, found in China has not yet been confirmed to be transmitted from person to person
Ministry of Public Security: Single telecommunications network fraud continues to cause 40 % of all electrical fraud cases
Special price "kill ripe"? Bike-sharing platforms have different prices for the same package for different users
A tech company in Shanghai has been fined 220,000 yuan for swiping orders to improve its ranking on Yelp
The most popular news this week
Yuyuki Kobayashi joins NetEase game! He worked on Devil May Cry 4 and Resident Evil 4.
Cyber violence governance needs the concerted efforts of all sectors of society
WeChat releases a new specification for the public account avatar setting, and the official news reminder is prohibited
After the U.S. chip bill takes effect, the manufacturer's snatching subsidy war is even more intense
Thousands of flights in the United States are delayed or canceled: User collapse extreme weather is frequent
Off the shelves one after another! The Sogou search App followed in the footsteps of Sogou Map
Xiaomi MIX flagship top with price reduction: consistent with the price of 12S Ultra
Semiconductor industry burst! Us Orders' Mother of All Chips' banned
Tesla suddenly accelerated out of control into a wall tragic: the owner of the right pedal and drive assistance
Lei Jun was splashed with cold water