Pinduoduo reported revenue of 21.5058 billion yuan in the third quarter, up 51% from the same period last year and short of market expectations of 26.5 billion yuan. Under American GAAP, marketing expenses amounted to 1,00506 million yuan, a decrease of 3% quarter-on-quarter, showing a downward trend for three consecutive quarters.

In the third quarter, the platform further increased its investment in technology research and development. Under GAAP, the platform's R&D expenses for the quarter were RMB 2,422.4 billion, up 34% from the same period last year, setting a new high for r&d investment. Meanwhile, according to pinduoduo's annual report, about 60% of the company's employees are r&d personnel. 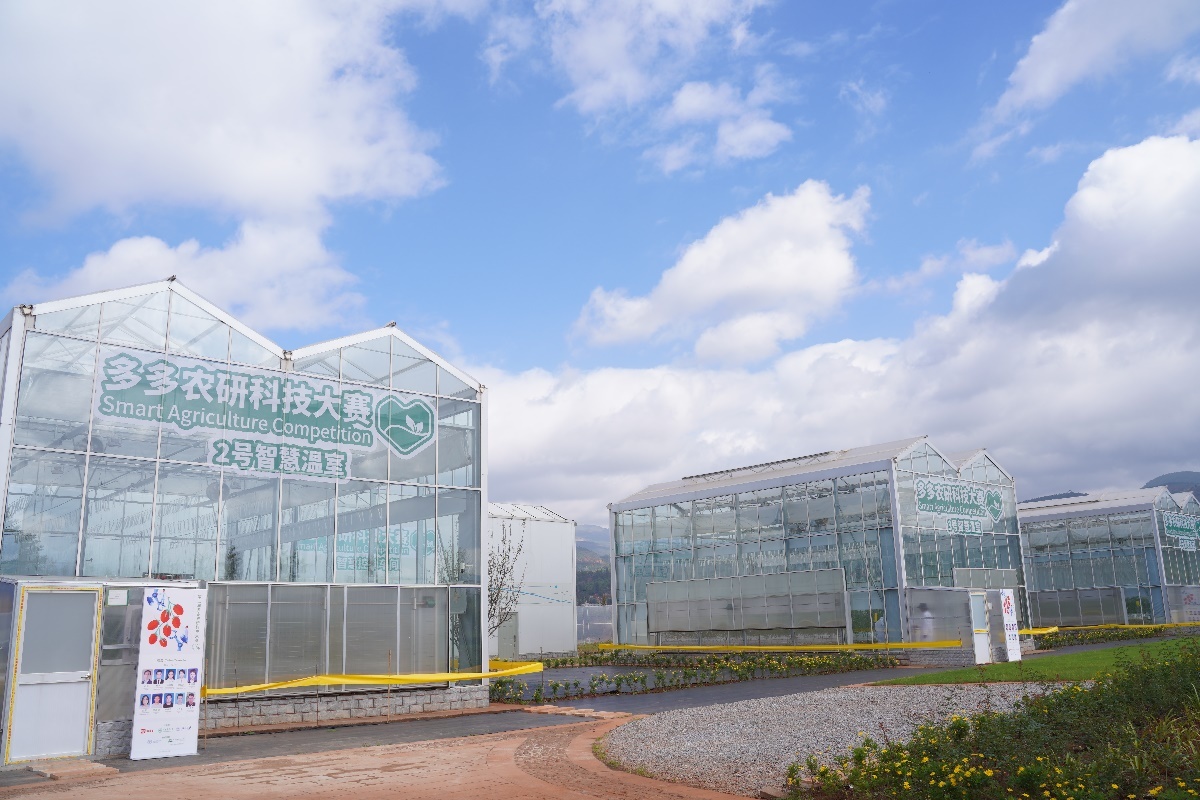 ▲ At the Duo Duo Agricultural research Competition Base in Kunming, Yunnan province, four teams in the final are planting tomatoes by AI. (Photo by Min Shan)

It has become a long-term choice for Pinduoduo to put more emphasis on research and development than marketing and stick to investing in agriculture. In addition, Chen Lei, chairman and CEO of Pinduoduo, said the company will provide more opportunities for young talent, with more young managers stepping up to take on key functions in the next six to 12 months.

As of September 30 this year, pinduoduo's annual active buyers have reached 867.3 million, an increase of 17.4 million in a single quarter, according to financial reports. Meanwhile, the average monthly active users of Pinduoduo APP reached 741.5 million in the third quarter.

In terms of revenue, Pinduoduo posted revenue of 21.5058 billion yuan in the third quarter of this year, up 51% year-on-year, mainly from online marketing technology services. Under American GAAP, the platform's marketing expenses in the third quarter were 1,00506 million yuan, a decrease of 3% from the previous quarter, showing a decreasing trend for three consecutive quarters.

Mr Chen said pinduoduo would shift its focus on marketing over the past five years to more research and development, and use its technological edge to further push the digitisation of agriculture.

Under the sound strategy of reducing marketing and focusing on research and development, according to THE American GAAP, the operating profit of the quarter was 2.1393 billion yuan, and the net profit attributable to common shareholders was 1.64 billion yuan.

In August this year, on the day of the release of the second quarter financial results, Pinduoduo announced the establishment of a "10 billion yuan agricultural research special", and the future profits of the priority to invest in this special. At the end of September, the "10 billion yuan agricultural research project" was approved by shareholders.

"All profits of this quarter will also be invested in the '10 billion yuan agricultural research special project' to continue to promote the progress of agricultural science and technology." Chen said technology and talent are key to advancing agricultural and rural modernization, and Pinduoduo is taking a systematic approach to encourage more young talents to take agriculture as their career choice.

Hundreds of contestants from all over the world signed up for the second Duoduo Agricultural research Competition held this year. Among them, most of the team members are post-90s, post-95s and even post-00s. Pinduoduo also works with world-class agricultural colleges and universities to provide tailored courses and training for these young agricultural talents, with topics such as greenhouse gardening, crop management and modeling. 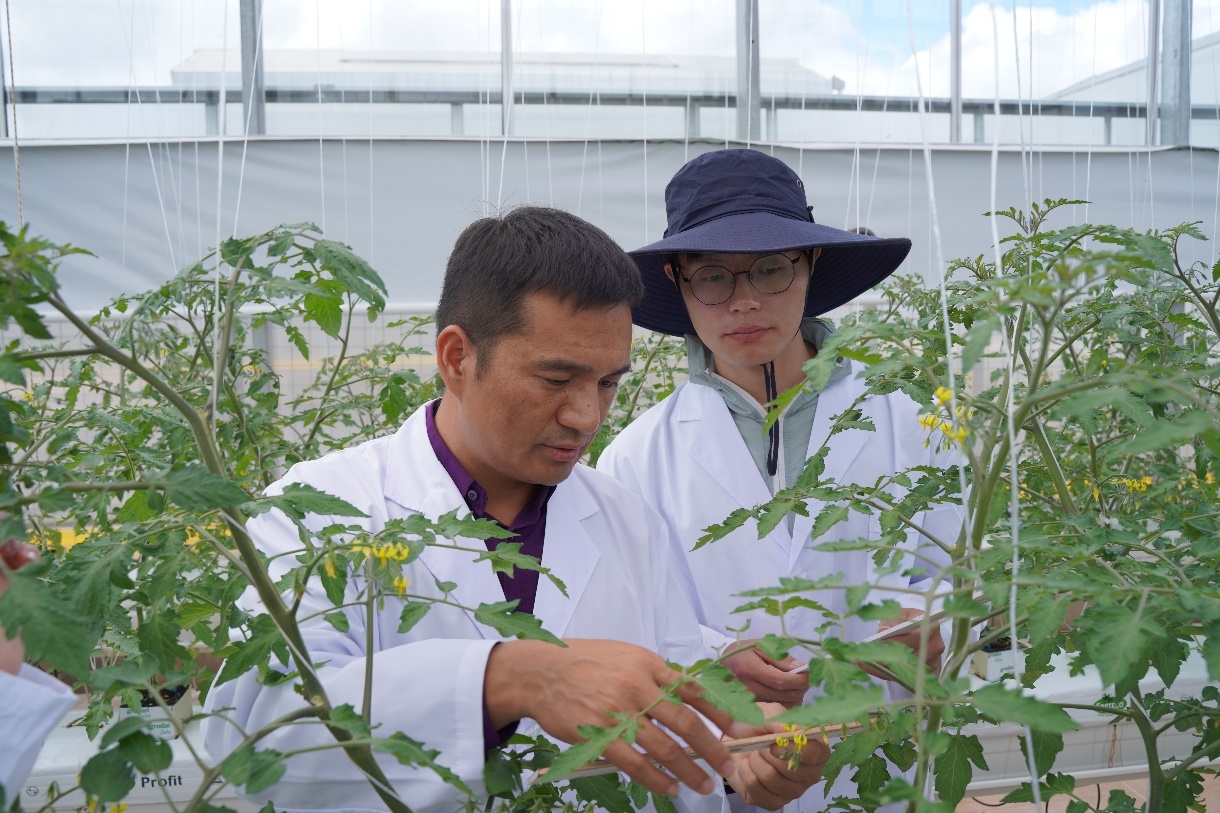 ▲ The expert team of the second "Duo Duo Agricultural Research Competition" is checking the growth of tomatoes. The first batch of AI tomatoes will bear fruit soon. (Photo by Min Shan)

In September, the four AI teams entered the final round, starting a six-month tomato growing competition. At the Duoduo Agricultural Research Base in Yunnan province, four teams are carefully cultivating tomato seedlings by remote means. The first AI tomatoes are expected to ripen in December.

In terms of team management, PINDUoduo will pay more attention to training young talents and managers. "We are pleased to see that many of the younger members of the team have demonstrated their core values of serving users and society, making practical business decisions and executing them steadily since the outbreak last year." Over the next six months to a year, more young managers will step forward to play key roles in shaping the company's future, Chen said.

From reducing marketing and focusing on research and development, to insisting on investing in agriculture as a long-term choice, and to strengthening the training of young managers, it is not difficult to see that Since taking over the post in March this year, Chen Lei, chairman and CEO of Pinduoduo, has chosen a more stable development path with more long-term confidence.

Related news
Cook should thank China for Apple's Q3 harvest
What about being ridiculed for "cutting leeks", Tesla Q3's performance has set a record again
Tencent Q3 financial report: Tencent conference users exceeded 100 million, cloud business accelerated benchmarking
Pinduoduo Q3 revenue of 21.5 billion less than market expectations pre-market down more than 12%
Pinduoduo released Q3 financial results and continued to re-store all profits of agriculture in the third quarter and continue to invest in the "10 billion yuan agricultural research special Project"
Special Q3 financial report: Dead agricultural shrink self-employment, the average monthly activation household reached 741.5 million
Interpretation of the more than Q3 financial results: dead agriculture shrink self-employment, transformed into "more farmers"? | the planet of wealth
Hot news this week
Behind the exposed layoffs, China has praised the loss growth, and the stock price has fallen 67% in three months.
The news said that the Wi-Fi7 chip uses a 7/6nm process to stimulate QFN packaging and aging testing needs
Alipay life channel 20 million people see Wufu Sheng Xiaoka lottery live, fans: difficult for the public
The U.S. government is introducing new policies to attract international students in fields like science and technology
The U.S. Senate Committee passed the tech antitrust bill, and giants such as Apple and Google rose to the challenge
It has been exposed that it will be acquired by Tencent: the Black Shark 5 game mobile phone is officially announced!
China has successfully developed the world's lowest power phase change memory: a thousand times lower than mainstream products
K50 e-sports edition opponent is coming! A new Chinese phone released in February: it claims to be the best gaming phone
Microsoft Apple Meta seizes the XR market, the Samsung of the fillet folding screen mobile phone or wants to catch up
Station B Bilibili 2021 Top 100 UP Main Selection: 63% of new entrants, double the proportion of scientific and technological knowledge
The most popular news this week
7 years! The classic control panel doesn't die: Windows 11 takes another step back
You can post 20 pictures on wechat moments, but these functions are still the most desired by users
For the "four crimes" involving untruthful credit asset quality, a village and town bank in Nanshan, Shenzhen was fined 1.5 million
Ministry of Industry and Information Technology: 355 million 5G users in China in 2021
Apple's Apple Watch Unity Light Dial Launched Black Unity Woven Strap
Quick upgrade! Apple release iOS 15.3: Repair iPhone, IPAD Important Vulnerability
Tesla's net profit in the fourth quarter increased by 760% year-on-year, and boss Musk is firmly on the throne of the world's richest man
Are you "socially afraid"? 70% of college students are afraid of becoming socially awkward Experts give advice
Samsung's fourth-quarter net profit of $8.86 billion increased 65% year-over-year
Oracle revealed its latest strategy in China: data center + service cross-border e-commerce