Intel's Core X series used to be the ultimate aspiration of enthusiasts, but with THE arrival of AMD's thread ripper, the Core X series soon lost its cool and is still stuck in 2019 with 18 cores at most, so that the Thread ripper of Zen3 architecture doesn't even bother to release.

Intel's next generation Fever platform was rumored to launch in the second quarter of next year, then delayed to the third quarter, and then Intel is said to have canceled the Core X series in favor of the station-based Xeon.

The latest reliable disclosures show that Intel has indeed changed its product planning,The 10nm Sapphire Rapids XEON Scalable server platform will evolve into two sets of workstation platforms, one high-end and one mainstream, which are positioned similar to the current Core X series but not purely for enthusiasts.

In terms of high-end platforms, it is confirmed that there will be up to 56 coresGolden Cove architecture, the acceleration frequency has been tested to exceed 4GHz, the final number is yet to be determined.

Core 12 is also being tested, but how the actual product will be defined is also unknown.

Memory supportEight-channel DDR5 ECC, up to 16, but the frequency is only 4400MHz with all of them plugged in. Only 8 of them can run to 4800MHz.

Prices will certainly be high, and top models are expected to be available$3000- $5000 range. 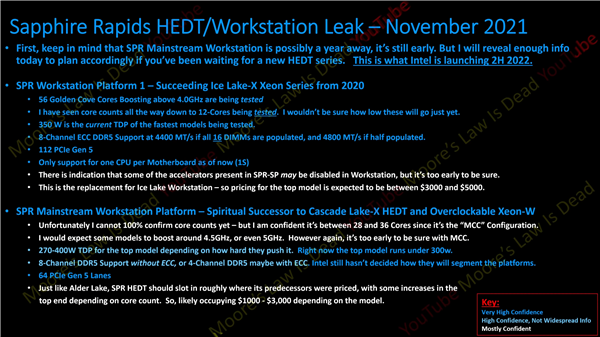 In terms of the mainstream platform, which we're looking forward to with the Fever series, there's a lot of uncertainty because it's not expected to be released for another year.

Currently, the maximum number of cores is between 28 and 36, not much more, which is nothing compared to up to 64 cores for thread rippers.

Frequency is hard to say, expect some models to accelerate to 4.5ghz, or even 5GHz, but that's just a hope.

Depending on the load, topThe Power consumption of the Class II model can reach 270-400W, although it has not exceeded 300W in tests so far.

PCIe 5.0 is reduced to a maximum of 64, memory may be 8-channel DDR5 with no ECC support, or 4-channel DDR5 ECC, Intel has not decided yet. 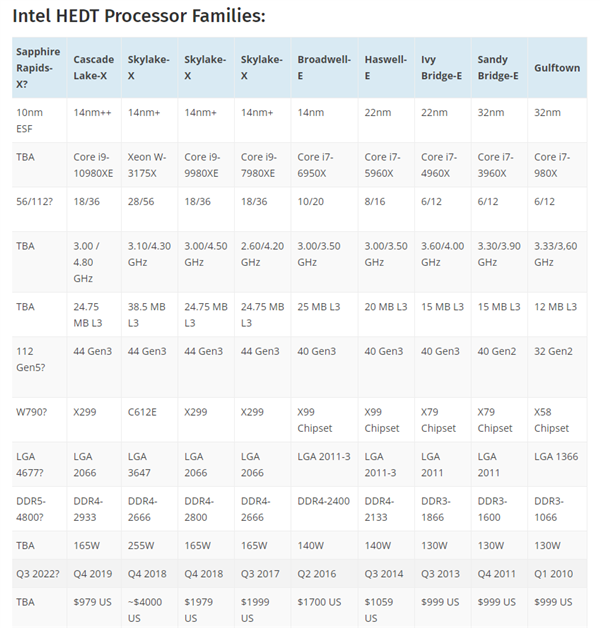 Related news
Front hard Gang! AMD to Intel
AMD's next target is Intel hinterland after reversing the game console / notebook / server market
AMD valuation is Intel? far higher Mother Su changed her life!
Intel and AMD's tortoise and rabbit race
Intel's strongest competitor in history: not AMD
Intel's strongest competitor in history was not amd for a long time
Experts say: there will be a price war between AMD and Intel sooner or later
Hot news this week
Templates for creating new Twitter in the future? Musk's praise of WeChat has triggered a heated discussion on the whole network
Tencent Music's TME live will re-screen Jay Chou's concert on may 20 and 21
Sony's new LinkBuds S headset parameter exposure: only 4.8 grams of comprehensive battery life 20 hours
Weak demand in the mobile market! Domestic shipments of mobile phones fell 40.5% in March to a two-year low
Henan 4 village bank line cannot withdraw cash? CBRC responds! The public security organs have registered an investigation
Baidu: In 2021, an average of 56 billion malicious information of all kinds will be intercepted every year
"Chinese version of LV" is re -executed 680 million! Reporting the property clues of the chairman, up to 8.66 million yuan
Pig companies continue to increase technology, just launched the smart pig farm, another 100 million to set up a technology company
The Jingdong Express bulk order sent to Shanghai across the country is completely static? JD.com: Not true No such information has been published
"Tencent's more than 30-year-old employees account for nearly 60% of them" on the hot search Netizens: Don't mention 35 years old, start to mention 30 years old
The most popular news this week
The domestic screens are rolled to the 2K screen. Why don't Apple follow the roll?
Meizu 19 series coming? Meizu mobile phone appearance patent disclosure: the return of secondary screen
Jingdong crowdfunding 10000mAh mobile power supply: with Apple Lightning and Type-c dual wires
Mobile phone chip CPU energy efficiency ranking: it is comparable to A14
What can we learn about m& # 111nkeypox cases in many countries around the world?
Alibaba Daniel Zhang connects 300 platform merchants: do more practical things for merchants
At the age of 58, he was elected as the chairman of Everbright Bank! Former President of Bank of China and Construction Bank
Buy An Audi or a Tesla? Audi's new electric vehicles are on sale: from 300,000
The first domestic Tianji 1300 mobile phone did not fire first! More than 260,000 people made reservations
The Chinese team officially made up for the bronze medal in the Tokyo Olympic relay! Su Bingtian responded excitedly