More than 4.3 million fines were confiscated! The listed bank was heavily fined for misappropriation of credit funds

On December 27, according to the official website of the China Banking and Insurance Regulatory Commission, Bank of Chongqing Co., Ltd. (hereinafter referred to as "Bank of Chongqing") received two consecutive fines due to a number of violations of laws and regulations, and the cumulative fines and confiscations exceeded 4.3 million. 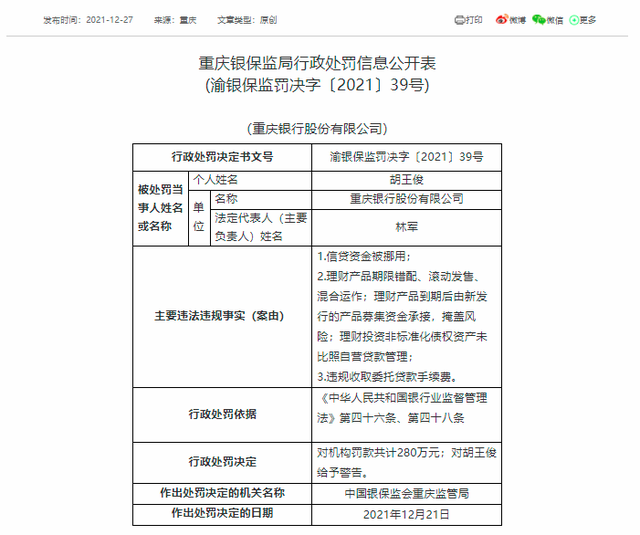 Another fine shows that due to the failure of the pre-loan investigation, the formation of "fake mortgage" loans; the issuance of credit loans to related parties; irregular transfer of credit assets, incomplete transfer of risks, insufficient provision withdrawals, etc., the Bank of Chongqing was fined 1.5 million yuan, and confiscated 25225.63 yuan of illegal gains. 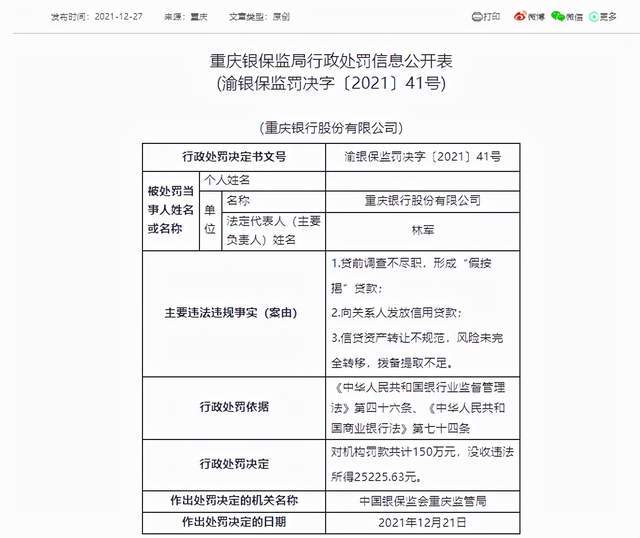 According to public information, Bank of Chongqing was established in 1996, is the earliest local joint-stock commercial bank established in the western region and the upper reaches of the Yangtze River, jointly initiated by 37 urban credit cooperatives and municipal cooperatives in Chongqing, 10 local financial bureaus and 39 enterprises and institutions to establish Chongqing City Cooperative Bank, in August 2007, approved by the China Banking Regulatory Commission, renamed Chongqing Bank.

On February 5, 2021, Bank of Chongqing landed on A shares, becoming the third A+H listed city commercial bank in China. On the first day of the A-share listing, Bank of Chongqing raised the limit after the opening of the market, and the closing price was 15.60 yuan per share, an increase of 44.04%. However, on the second trading day of the A-share listing, the company appeared to have a flash crash and stop situation.

Since then, the share price of Bank of Chongqing has maintained an overall downward trend. As of the close of trading on December 27, the bank's A-share price has fallen to 8.87 yuan, down more than 40% from the high since the listing. (Text| AI Finance & Economics Summer)

Related news
1MORE called apple sony! A real wireless headset is AirPods.
Why does "one more thing" Apple make its own chips?
More than 4.3 million fines were confiscated! The listed bank was heavily fined for misappropriation of credit funds
Hot news this week
Templates for creating new Twitter in the future? Musk's praise of WeChat has triggered a heated discussion on the whole network
Tencent Music's TME live will re-screen Jay Chou's concert on may 20 and 21
Sony's new LinkBuds S headset parameter exposure: only 4.8 grams of comprehensive battery life 20 hours
Weak demand in the mobile market! Domestic shipments of mobile phones fell 40.5% in March to a two-year low
Henan 4 village bank line cannot withdraw cash? CBRC responds! The public security organs have registered an investigation
Baidu: In 2021, an average of 56 billion malicious information of all kinds will be intercepted every year
"Chinese version of LV" is re -executed 680 million! Reporting the property clues of the chairman, up to 8.66 million yuan
Still did it! Canada has banned Huawei and ZTE from participating in the country's 5G network on "national security" grounds
Pig companies continue to increase technology, just launched the smart pig farm, another 100 million to set up a technology company
The Jingdong Express bulk order sent to Shanghai across the country is completely static? JD.com: Not true No such information has been published
The most popular news this week
The domestic screens are rolled to the 2K screen. Why don't Apple follow the roll?
Meizu 19 series coming? Meizu mobile phone appearance patent disclosure: the return of secondary screen
Jingdong crowdfunding 10000mAh mobile power supply: with Apple Lightning and Type-c dual wires
Mobile phone chip CPU energy efficiency ranking: it is comparable to A14
What can we learn about m& # 111nkeypox cases in many countries around the world?
Alibaba Daniel Zhang connects 300 platform merchants: do more practical things for merchants
At the age of 58, he was elected as the chairman of Everbright Bank! Former President of Bank of China and Construction Bank
Buy An Audi or a Tesla? Audi's new electric vehicles are on sale: from 300,000
The first domestic Tianji 1300 mobile phone did not fire first! More than 260,000 people made reservations
The Chinese team officially made up for the bronze medal in the Tokyo Olympic relay! Su Bingtian responded excitedly