In Q4 2021, Apple regained the first place in the world's smartphones 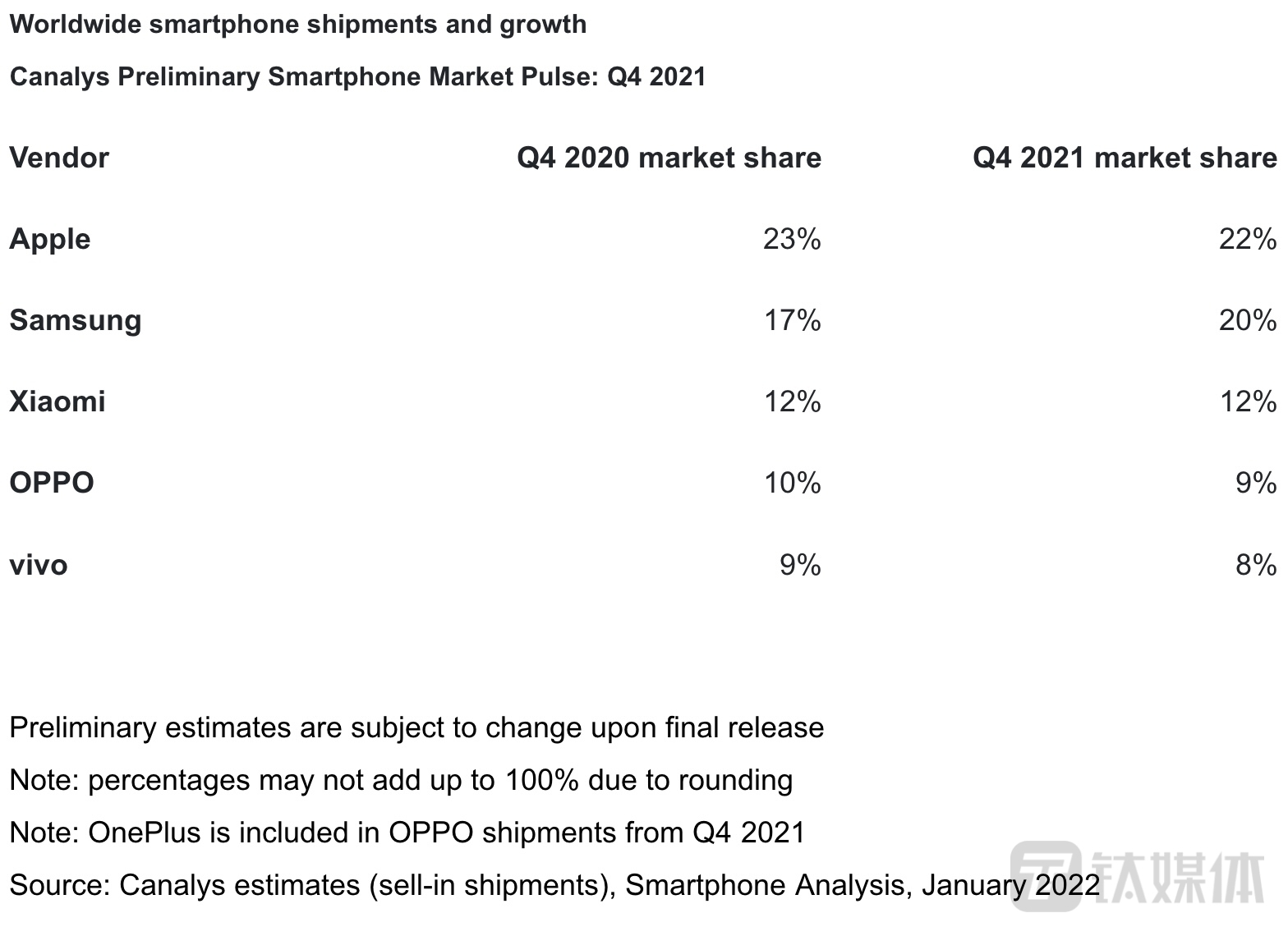 With the release of the iPhone 13 series, Apple accounted for 22% of the global total in the fourth quarter, up significantly from 15% in the third quarter. Samsung ranked second with a market share of 20%, compared to 21% in the previous third quarter. Subsequent millet, OPPO, vivo ranking unchanged, market share is 12%, 9% and 8%.

In terms of price, the iPhone 13 series has carried out a full line of price reductions. The same as the 256GB version, the first price of the iPhone 12 is 7599 yuan, while the iPhone 13 is 6799 yuan, and other versions also have 300-800 yuan of different adjustments.

In the Chinese market, due to the existence of activities on platforms such as Pinduo's tens of billions of subsidies, the price of the iPhone 13 series products quickly fell below the first launch.

Titanium Media App believes that Apple has won more markets with the iPhone 13 series, which is not a small pressure on the Android camp. If Apple chooses to enter the field of folding screen mobile phones in 2022, high-end mobile phones are bound to reshuffle. In turn, if Apple pushes the current entry-level iPhone SE of 3299 yuan to the 2000 yuan price segment, the pattern of the entry-level mobile phone market will also usher in turmoil. Whether Apple is in or out, Android mobile phone manufacturers need to seize the time to prepare to deal with it.

In addition, in the past 2021, Android mobile phone manufacturers are trying to impact the high-end market, but from the results, the iPhone 13 series is still in an unbreakable position after the release.

Related news
Omdia: Huawei fell out of the top 5 in global smartphone market in Q4 last year
IPhone Q4 shipped nearly 80 million last year! In recent years, it is the first time to surpass Samsung
In Q4 2021, Apple regained the first place in the world's smartphones
SA: Apple leads the global smartphone market in Q4 2021 Samsung remains the first in the year
2021Q4 China mobile phone shipments are coming: Honor is firmly in the first place
Microsoft first ranks among the top five! 2021Q4 global flat sales ranking release: reason
SA: Microsoft 2021 Q4 first ranked among the top of the world's top tablet manufacturers, Samsung
Counterpoint announced 2021 Q4 US smartphone market share: Apple accounts for 57%
SA: Global smartphone wholesale revenue in Q4 2021 increased by 6% year-on-year
Hot news this week
China has found 35 known cases of the new zoonotic virus Langya
Losses in a single quarter of $ 23.4 billion a record, SoftBank did not carry the plunge of technology stocks and the devaluation of the yen
The prevention and control of the American Monkey epidemic has failed. What should I pay attention to?
Is the micro -business headache? WeChat friends are suspected to have a big move: 7 can only be posted a week
Kuaishou launched a self-developed cloud intelligent video processing chip: The chip has been streamed successfully
The new product of Xiaomi MIX is coming: both internal and external dual -screen has been upgraded to make up for the previous generation.
A new zoonotic virus, Langya, found in China has not yet been confirmed to be transmitted from person to person
Ministry of Public Security: Single telecommunications network fraud continues to cause 40 % of all electrical fraud cases
Special price "kill ripe"? Bike-sharing platforms have different prices for the same package for different users
A tech company in Shanghai has been fined 220,000 yuan for swiping orders to improve its ranking on Yelp
The most popular news this week
Executives' stole 'chip technology to set up a company and sold it to employers for 1 billion yuan
The total sales volume of PS4 may set 117.2 million units currently ranking fourth in sales machine sales
MacOS Ventura feature page removes third-party app 'Hide My Email'
Yuyuki Kobayashi joins NetEase game! He worked on Devil May Cry 4 and Resident Evil 4.
Cyber violence governance needs the concerted efforts of all sectors of society
WeChat releases a new specification for the public account avatar setting, and the official news reminder is prohibited
After the U.S. chip bill takes effect, the manufacturer's snatching subsidy war is even more intense
Thousands of flights in the United States are delayed or canceled: User collapse extreme weather is frequent
Off the shelves one after another! The Sogou search App followed in the footsteps of Sogou Map
Xiaomi MIX flagship top with price reduction: consistent with the price of 12S Ultra