IT House January 26 news, Apple Apple Watch launched a dial called "Unity Light", inspired by African futurism, the hour and minute hands will emit light to illuminate the dial, there are two colors of red and green and black and white.

According to reports, the "Light of Unity" dial is designed with 2D ray tracing technology, which is the first time this technology has been applied to the dial. Each pixel on the screen simulates the light and shadow that falls on the dial, and the movement of the pointer reveals and blocks the light in real time, dynamically changing with the time of day.

The United Light dial can be customized to fill the entire screen or appear as a round dial, including black and white options, hour markers, up to four complications, and text imprint options.

In addition, Apple introduced the "Black Unity" woven single-circle strap corresponding to this dial, priced at 779 yuan, and is available in 41 mm and 45 mm versions.

According to reports, the Black Unity woven single-circle strap was designed by African-American creatives on the Apple team to express respect for the history and culture of the African-American community; its design is inspired by African Futurism, which aims to explore the development of African ethnic groups, and the art form is to show their science, technology and self-improvement. This product is a tribute to every generation of African Americans, whether they are recognized or not, and symbolizes a strong belief in making the world more equal. 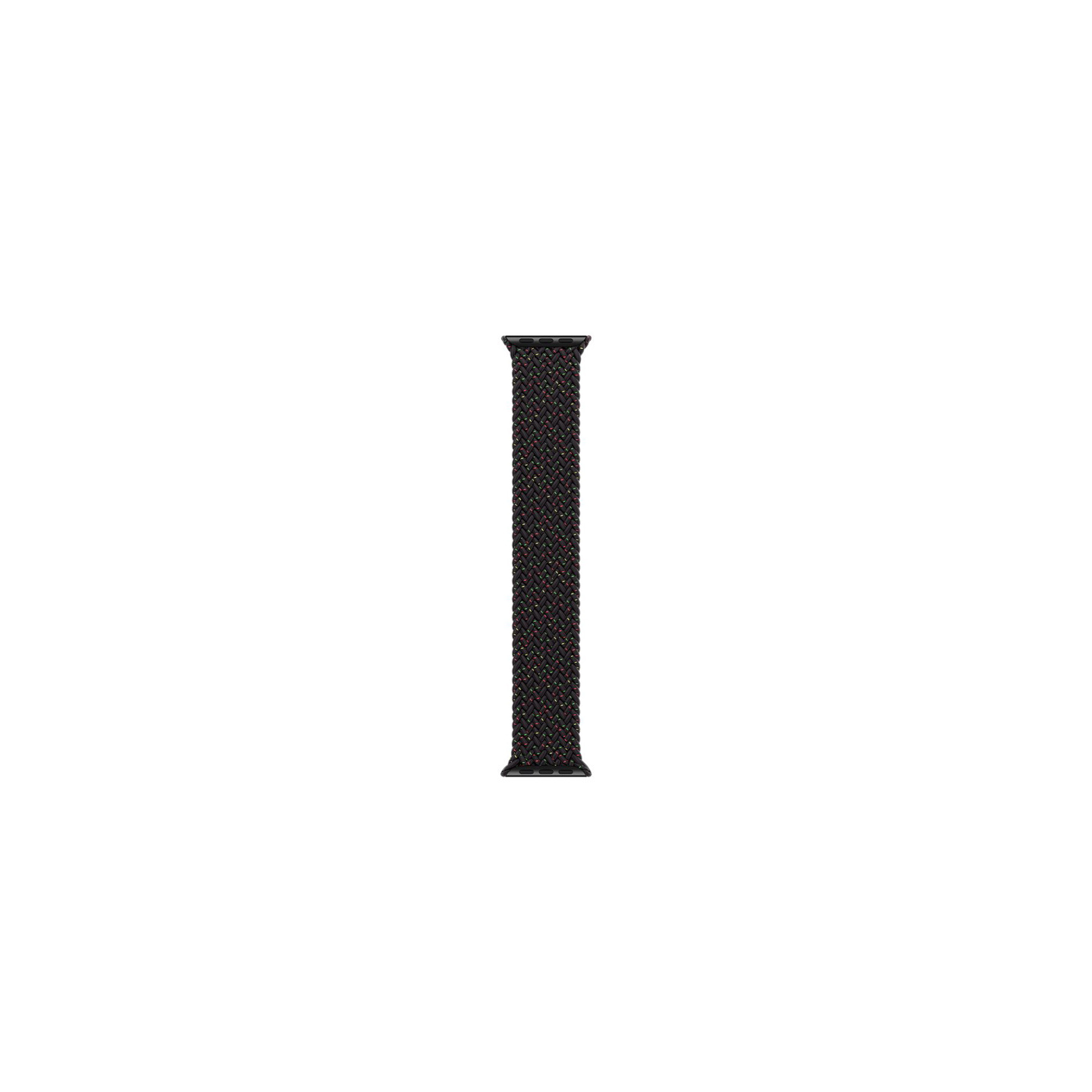 IT House learned that the strap is colored from the Pan-African tricolour flag, made of 16,000 recycled polyester yarn filaments wound around ultra-fine silicone wire, interwoven using a precision knitting machine, and then laser cut to obtain a precise length, to achieve a tailor-made fit. It is soft and textured, and has sweat and water resistance. In addition, the strap buckle features the words Unique Black Unity laser etching. 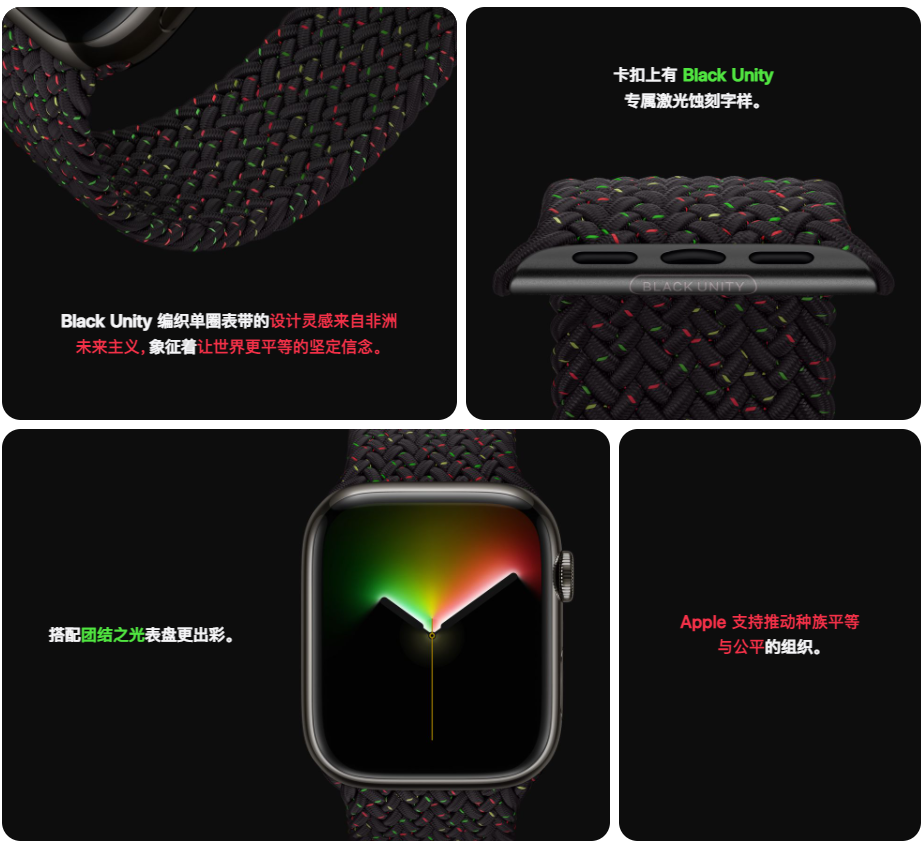 Apple said that to celebrate Black History Month, Apple will recommend black-run stores, pay tribute to the innovative achievements of black people, and highlight the voices of black people through a series of exclusive content and condensed anthologies. Starting today, customers can also download a special edition of the Light of Unity dial and order the new Apple Watch Black Unity woven single-lap strap.

The annual Black History Month celebrates the achievements of black Americans in overcoming difficulties and celebrates the important role that blacks played in the development of American history.

The event was formerly known as Black History Week and was co-sponsored by historian Carter G. Woodson and a number of other prominent blacks. Since 1976, successive U.S. presidents have designated February as Black History Month. Other countries, such as Canada and the United Kingdom, have followed the example of the United States in designating a month for similar celebrations.

Related news
China's nearly 80% mobile game development: talk about Unity past life this life
We talked to unity about how to help make 3A games
Apple watch 6 Black unity limited edition on sale: from 3199 yuan
Apple's Apple Watch Unity Light Dial Launched Black Unity Woven Strap
Hot news this week
Templates for creating new Twitter in the future? Musk's praise of WeChat has triggered a heated discussion on the whole network
Tencent Music's TME live will re-screen Jay Chou's concert on may 20 and 21
Sony's new LinkBuds S headset parameter exposure: only 4.8 grams of comprehensive battery life 20 hours
Weak demand in the mobile market! Domestic shipments of mobile phones fell 40.5% in March to a two-year low
Henan 4 village bank line cannot withdraw cash? CBRC responds! The public security organs have registered an investigation
Baidu: In 2021, an average of 56 billion malicious information of all kinds will be intercepted every year
"Chinese version of LV" is re -executed 680 million! Reporting the property clues of the chairman, up to 8.66 million yuan
Still did it! Canada has banned Huawei and ZTE from participating in the country's 5G network on "national security" grounds
Pig companies continue to increase technology, just launched the smart pig farm, another 100 million to set up a technology company
The Jingdong Express bulk order sent to Shanghai across the country is completely static? JD.com: Not true No such information has been published
The most popular news this week
The domestic screens are rolled to the 2K screen. Why don't Apple follow the roll?
B station was exposed to layoffs: involving games, overseas business, OGV and other departments
Continuous business adjustment? Ali has been exposed to many sectors layoffs, and the scale of spring recruitment has shrunk sharply
Exposure of Tencent's game business or layoff 10 %: CSIG business group has previously layoffs 15 %
Meizu 19 series coming? Meizu mobile phone appearance patent disclosure: the return of secondary screen
Jingdong crowdfunding 10000mAh mobile power supply: with Apple Lightning and Type-c dual wires
Mobile phone chip CPU energy efficiency ranking: it is comparable to A14
What can we learn about m& # 111nkeypox cases in many countries around the world?
Alibaba Daniel Zhang connects 300 platform merchants: do more practical things for merchants
At the age of 58, he was elected as the chairman of Everbright Bank! Former President of Bank of China and Construction Bank