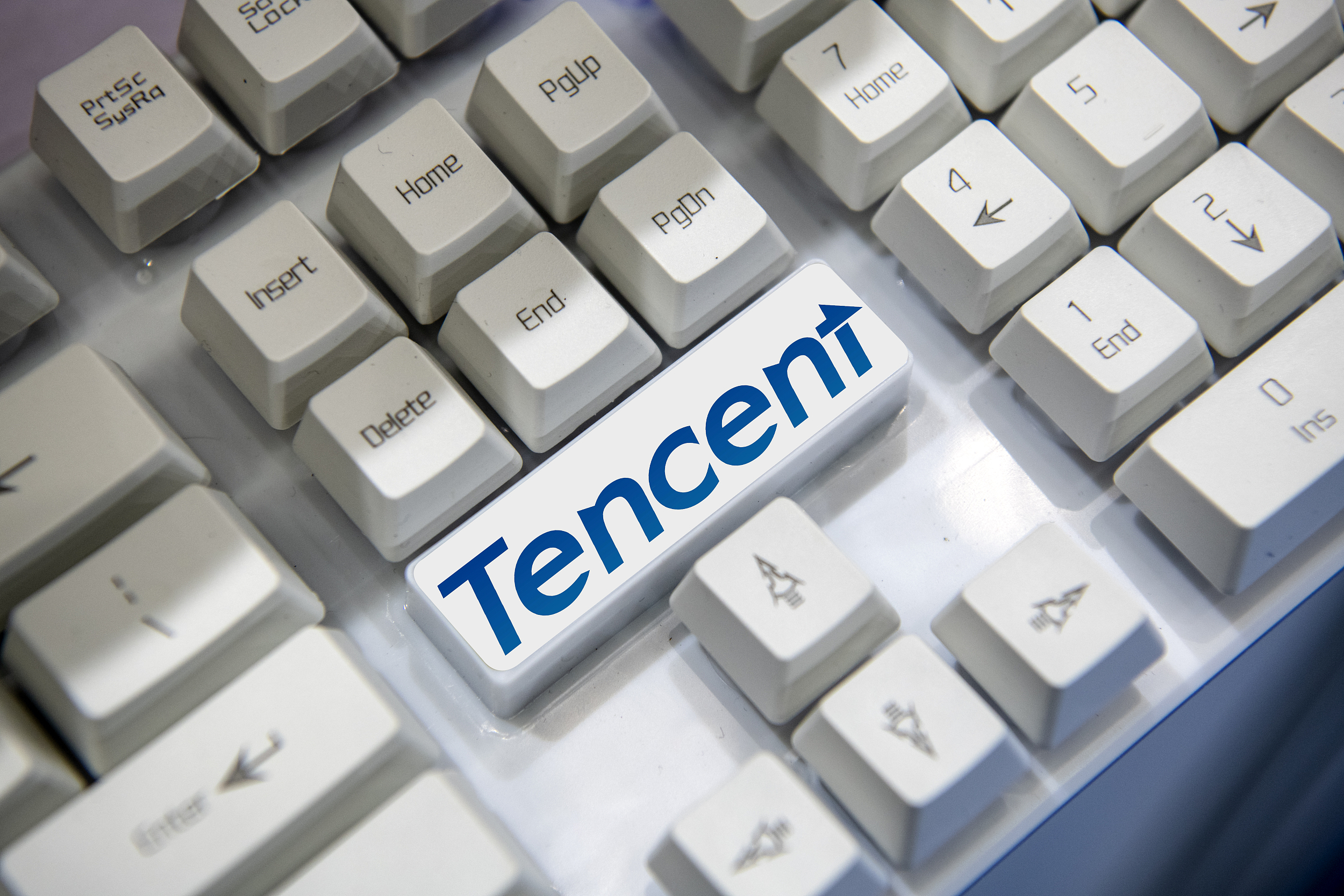 The external performance was under pressure, and Tencent wrote the optimized cost structure into the financial report this time.

Ma Huateng, chairman and CEO of the board of directors, said in the financial report: "In the first quarter of the challenging 2022, we implemented cost control measures and adjusted some non -core businesses to help us realize more optimized cost structures in the future. "Cost control and optimization of non -core business have also affected Tencent's enterprise service business.

According to the first quarter of the 2022 financial report released by Tencent, the revenue of fintech and corporate service business in the first quarter of 2022 was 42.8 billion yuan, an increase of 10%year -on -year. From the perspective of total revenue, the proportion of revenue of fintech and corporate services has increased from 25%in 2019 to 32%. The revenue of this sector has already exceeded network advertising to become Tencent's second largest growth engine. 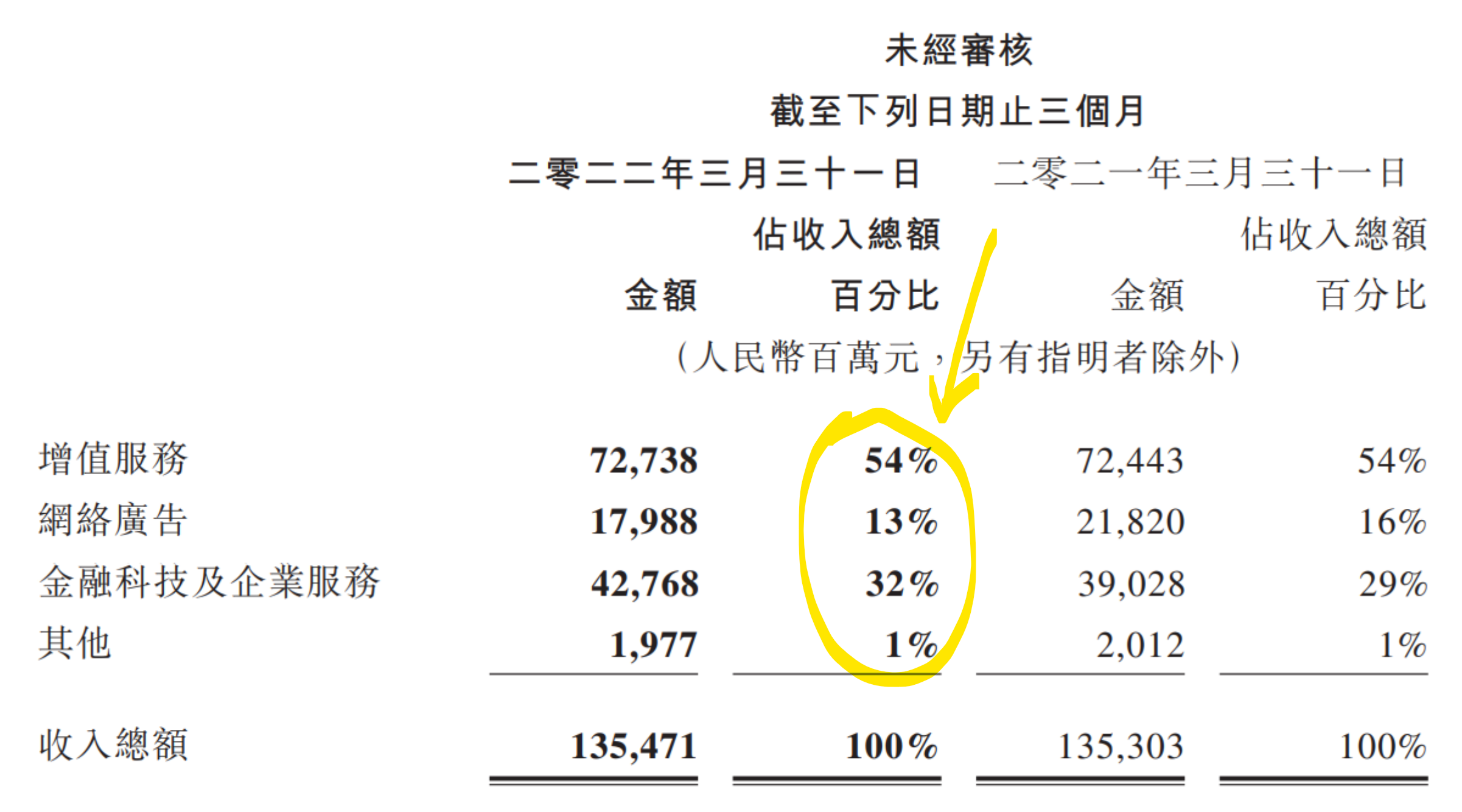 However, as the second largest growth engine, the performance of fintech and corporate services in the first quarter of 2022 was not unsatisfactory, and the growth rate fell sharply. The growth rate of the same period last year was 47%, and this data this year was 10%. 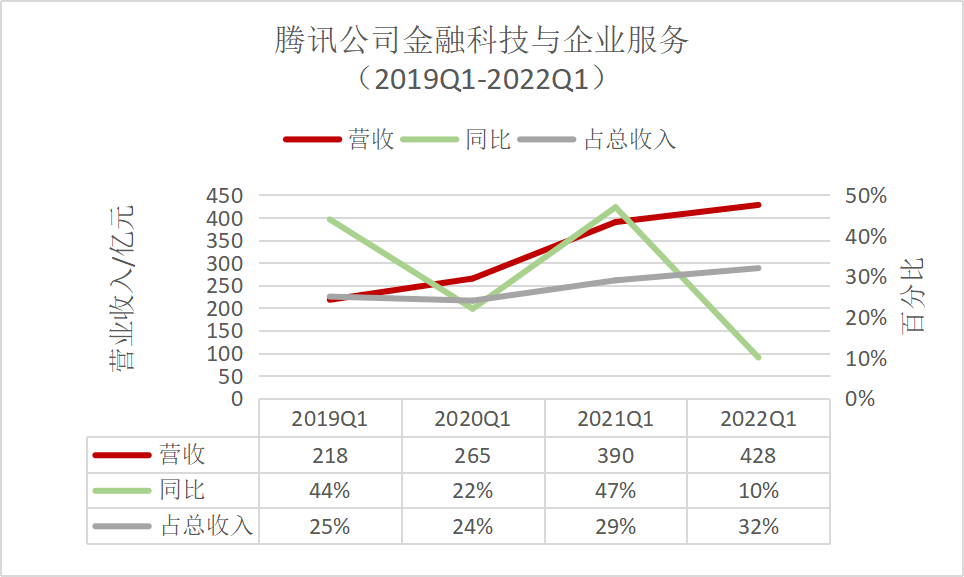 At the same time, another data also shows that in fintech and corporate service sector, Tencent not only declined year -on -year, but also decreased 11 percentage points in a month -on -month.

As for the reasons, Tencent's financial report began from two aspects: fintech and corporate services.

In terms of fintech, in March 2022, a new round of new crown epidemic affected,Weak commercial payment transaction amountFor example, most stores closed stores, decreased passenger flow, etc. during the prevention and control of the epidemic; and due to seasonal influence, the amount of social payment has fallen seasonal decline.

In terms of corporate services, the financial report is called "Corporate service revenue has decreased slightly year -on -year "(not specified data)Tencent has taken the initiative to reduce the loss of losses, re -position the IaaS service, and from simply pursuing income growth to realizing healthy growth. Due to the decrease in seasonal deployment of cloud service projects.

However, while the year -on -year growth rate and the decline in revenue of the month -on -month revenue, in the first quarter of 2022, the income cost of Tencent Financial Technology and the enterprise service sector also achieved a month -on -month decrease, a decrease of 16%to 29.3 billion yuan (a year -on -year increase of 11%) ,The reason is thatCloud service project deployment related costs decreasedAnd the low payment amount leads to a decrease in bank fees for payment services.

In terms of sales and marketing expenditures, this quarter decreased by 31%month -on -month, a year -on -year decrease of 6%to 8.1 billion yuan. In addition to the seasonal impact, the reasons for the decline in the month of the month also have games and games caused by throttling measures.Enterprise service businessMarketing expenditure decreases; the reason for the decline in year -on -year is to reduce costs and increase efficiency, but in fact, it has basically maintained stable.

However, Tencent's general administrative expenditure achieved a year -on -year increase of 41%to 26.7 billion yuan, and the month -on -month increase was basically stable. Increase), increased expenditures overseas, and expenditures for subsidiaries acquired.

On the whole, in the face of market uncertainty, Tencent adopted a "conservative" strategy,The market share is no longer expanded at the cost of losses, but it focuses on projects with good commercial performance.However, the rise in general expenditures (administrative and research and development costs) also proves that while conducting strategic shrinkage, Tencent also retains sustainable support for key projects. As Ma Huateng said: "Tencent will continue to invest in the field of strategic growth, including corporate software, video numbers and international market games."

Under this premise, the business center of Tencent's enterprise service also has new ideas.

That is, for the healthy growth of the business service business, the financial report states that Tencent has concentrated resourcesPaaS solution in the field of video cloud and network security。On the video cloudMore and more basic CDN (content distribution network) customers use Tencent's video on demand, live and real -time communication solutions.In terms of network securityTencent has expanded the customer base of network, terminal nodes and business operation security solutions, and meets the increasing demand for corporate customers in terms of network attack protection and network security compliance.

This is one of the many measures for Tencent to gradually correct the direction of TO B.

Since Tencent conducted the overall industry Internet in 2018, its TO B development strategy has been adjusted and corrected. For example, in addition to the investment in PAAS solutions in the fields of video clouds and network security, in the fourth quarter of 2020, in the last issue of the last issue, Tencent also emphasized that its communication and collaboration SaaS played in corporate organization management. Important role.

Attachment: Tencent To B major event

In October 2018, it is clear that "serving the industry with C2B, and the industry Internet is rooted in the next 20 years";

In October 2019, the Qianfan plan for the construction of the SaaS ecosystem was launched;

In December 2019, the Tencent Conference was launched;

In January 2020, the video number was launched internal test;

In January 2021, it was announced that the open ecology of the industrial Internet was initially formed;

In May 2021, the second strategic upgrade of Tencent Cloud and Smart Industry Group (CSIG), rooted in the industry, deeply cultivated areas, and improved efficiency;

In January 2022, the company's WeChat, Tencent Conference, and Tencent document announced the integration;

In March 2022, communication and collaboration SaaS appeared in the financial report;

In May 2022, increased investment in PAAS solutions in the fields of video clouds and network security;