Red Elf Lightning erupts in the Himalayas Spectacular Spectacle: Experts Reveal What Exactly Is This?

In the early morning of May 20, Chinese photographers recorded red elf lightning in the Tibetan Himalayas. It is reported that the red elf lightning is formed in the middle layer of the atmosphere, ring-shaped, jet DC-like, jellyfish-like, is the result of electromagnetic waves generated by lightning strikes, it only exists in the air for a few tenths of a second, elusive.

For such a scene, netizens have also sighed, it is really too beautiful, just like the universe's ultimate romantic fireworks show. Netizen Paulownia Dong Shuchang also said on Weibo that in the early morning of 520 in 2022, he recorded fireworks blooming over the Himalayas - countless genie lightning.

There is a certain similarity between elven lightning and aurora, they are particles in the atmosphere that are excited and radiate. With auroras being caused by the solar wind, solar storms hitting the Earth's magnetosphere, causing atmospheric particles to move ionized at high speeds, transitioning and glowing. The difference is that elven lightning is due to the phenomenon of a powerful lightning bolt occurring in the thunderstorm below that triggers a series of electromagnetic effects transmitted to the high altitude, which in turn triggers lightning at a high altitude.

Reports of elves date back to 1886, but it wasn't until July 6, 1989, that scientists at the University of Minnesota first photographed them. Tens of thousands of photos or videos of genie have been taken so far. Why didn't everyone pay attention to the red elves until a hundred years later? This is because this red sprite is caused by the positive flash generated between the thunderstorm cloud below and the ground, appearing for a few milliseconds or so, requiring a high-speed camera to capture.

The upper part of the red elf is orange-red, and the hanging tendrils look like huge red jellyfish, and this phenomenon usually occurs in groups, spanning an altitude of 50 to 90 kilometers. In addition to the red elves, photography enthusiasts have also reported jets in Tibet, which is also a phenomenon related to strong storms. 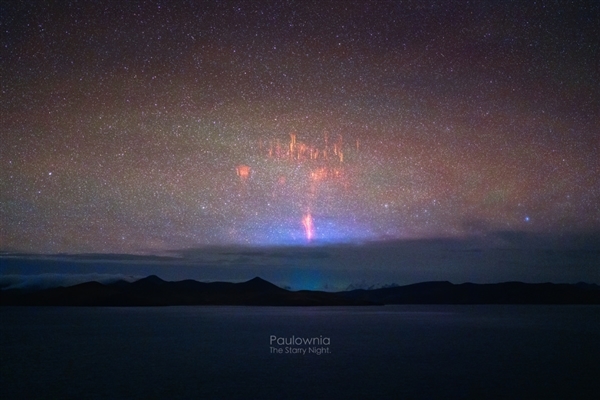