According to CCTV news reports, the latest research results of the Emperor Qin Shi Ling K9901 Hundred Acts Female Fetting Farmers were unearthed. The latest research results of the pottery figurines were found to be found on the 28th lying figurine. By comparing the fingerprint database, we can see that the manufacturing craftsman should be young people.

On the 28th, the figurines of the 28th drama were found in the middle of the K9901 funeral pit. The east end of the hole was very serious. It was composed of 72 pieces and 12 bags of residues. Different from other common standing or sitting pottery figurines in the pits, the repaired 28 figurines showed a posture of supine, similar to the carp to fight or lean behind, and the cultural security expert temporarily called it & ldquo; Essence

The repair of the lying figurines uses foam, sandbags and other materials to assist pairs to bond with epoxy resin. Because of the large cracks on the belly and back of the back, in order to ensure the restoration and display of pottery figurines, the inner wall was reinforced with gauze and epoxy glue. At the same time, cultural security personnel selected epoxy resin glue and brick powder to make up for the missing parts. After completing the materials, the type of workers such as surgery, dental diamonds, and sandpaper are repaired.

Zhou Ping, deputy dean of Emperor Qin Shi Mausoleum Museum, said, "The digital protection and restoration of the supine figurines, including the high -precision modeling records of the surface and geometric form of the construction of cultural relics. Through the observation and research of the traces of the 28th figurines, the Wenbao personnel discovered the fingerprint marks. By comparing the fingerprint database, we can see that the craftsman of the No. 28 -acting figurine should be a youth. 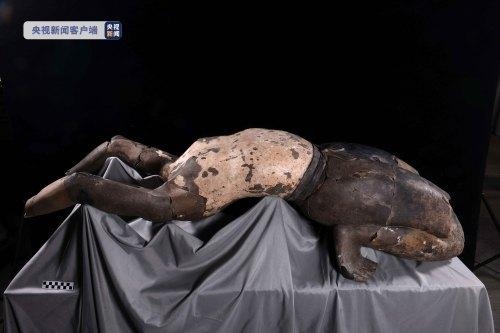 Related news
HIV CURE FOUND
Why does Qinling Mountain become the dividing line between North and south of China? One graph proof
HERPES CURE FOUND
Forest musk deer, a first class protected animal in China, has been discovered by infrared camera: it can secrete musk
The world's only brown giant panda on display netizen: is there no ink when I print to you?
Follow the shocking mobile phone video to explore the national park tour
Qinling Yang's figurine found fingerprint marks netizens directly called strong: experts revealed the secrets
Hot news this week
Too many questions! Apple has changed the timing of the official release of iOS 16 series
Monkey acne cases have ranked first in the world that the United States has announced the emergency state of public health
Tencent and Logitech cooperation of the cloud game console Revelations: equipped with Android system configuration is low
Credit card points rule intensive adjustment online transaction points more "valuable"
High reserves and low cost experts: calcium ion batteries replace lithium batteries to stand up to the daily
Alibaba executives interpret financial results: the focus of the consumer side is no longer to attract new, but to do a good job in stratified operation
Losses in a single quarter of $ 23.4 billion a record, SoftBank did not carry the plunge of technology stocks and the devaluation of the yen
Sources say Samsung's Galaxy Z Fold4 is going up in price: a 512GB top unit will cost more than 13,000
The prevention and control of the American Monkey epidemic has failed. What should I pay attention to?
Is the micro -business headache? WeChat friends are suspected to have a big move: 7 can only be posted a week
The most popular news this week
After selling Tesla for $6.9 billion, Musk said he was not selling it, but a survey said he was still selling it. The title of the world's richest man may not be guaranteed next ye...
Distributed database OceanBase announced 4.0 product release, single -machine deployment performance is super mysql
The three major indexes of the US stocks opened sharply: ROBLOX fell more than 4%, Twitter and Tesla rose more than 3%
Japan has confirmed that China has overtaken the US for the first time in the world's top three indicators of scientific papers
A wake-up call for Apple? Foxconn says it is feeling the sting of slowing demand for smartphones
Joining Chip Alliance could serve as bridge, says South Korean Foreign Minister
Joe Biden also mentioned Chiplet? An unexpected A-share buzzword in A White House briefing
Nio Li Bin responds to mobile business rumors: This should be the definition of other people's imagination to us
Amazon is pushing a feature called "swipe to pay" that scans your palm to pay in seconds
Text message color, picture quality compression! Google calls out Apple for improving cross-device messaging