Following the introduction of the ARMv9 instruction set for the next decade in March last year, ARM released the first generation of ARMV9-based cpus in May, including the Cortex-X2 and A710 cpus. Today, ARM has released the Cortex-X3, A715 and A510 Refresh ARMv9 products. 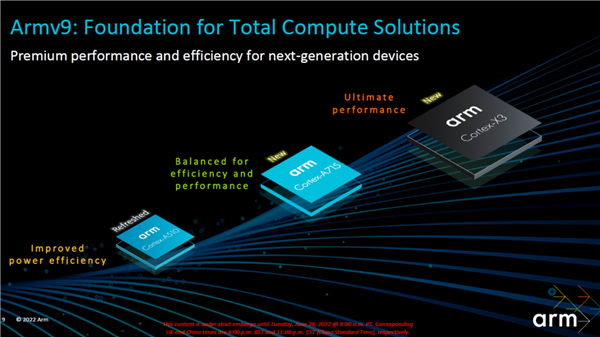 This generation of Cortex processors is designed for smartphones, tablets, and laptops, so there are a lot of things to release, as well as the new DSU-110 core and size scheduling architecture, which can do up to 8+4+0 for a total of 12 cores.

First, the CPU as a whole, cortex-X3 and A715 are upgraded versions of the Cortex-X2 and A710 respectively, with peak performance improved by 25% and hybrid performance and energy efficiency improved by 20%.

It's worth noting that both Cortex-X3 and A715 have abandoned the AARCH32 instruction set in favor of a 64-bit architecture.

What about the old 32 bits? ARM also introduced A510 Refresh, also known as A510 V2 version, which not only improves performance and energy efficiency, but also supports up to 12 core architectures.It is also optionally compatible with the AARCH32 instruction set, but only in certain choices.

Overall, ARM is committed to making a full shift to 64-bit in the Cortex-X3, A715, and A510 V2 architectures, though it's not eliminating 32-bit altogether, leaving less and less space for 32-bit compatibility. 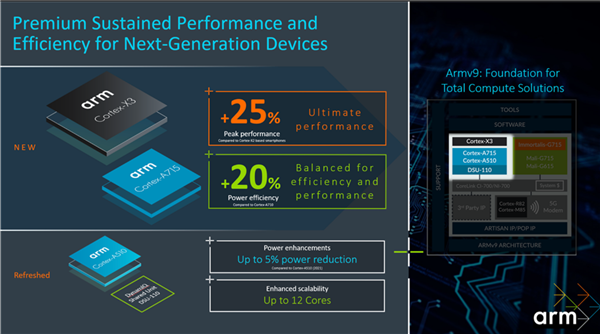 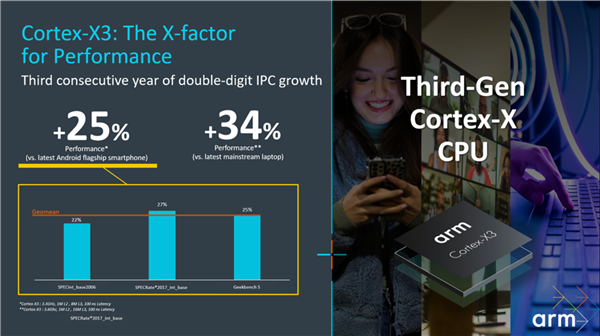 As a super-large core, the Cortex-X3 is focused on performance, and this generation of architecture has improved a lot. The decoder has increased from 5 to 6 instructions per cycle, out-of-order execution Windows from 288 to 320, integer ALU units from 4 to 6, and so on.

Among other things, the Cortex-X3's L2 cache capacity has been increased from 512KB to 1MB. 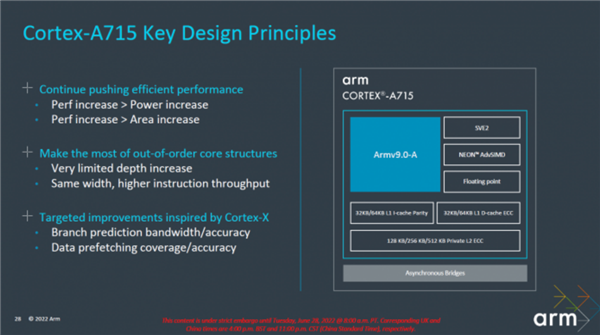 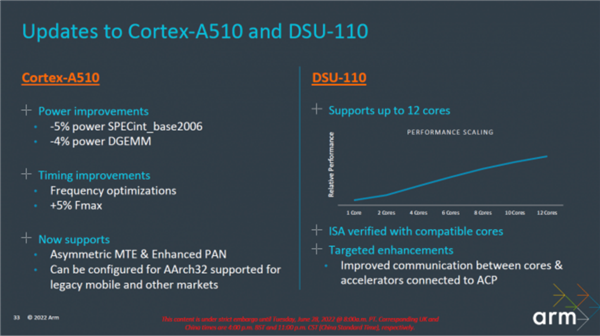 Finally, the architecture of A510 small core. The current A510 V2 does not change much compared with the A510 in 2020. The focus is still on optimizing energy efficiency.The same performance power consumption is reduced by 5% and the frequency is increased by 5%, so the previous 1.8ghz frequency can now be increased to around 1.9ghz. 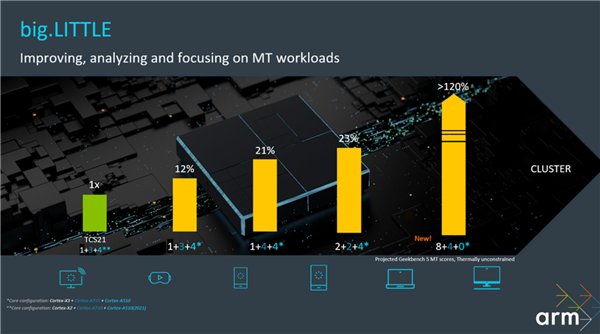 There is also THE DSU-110, which is a new generation of core interconnection technology with a more flexible core collocation mode. In addition to 1+3+4, there are also 1+4+4, 2+2+4 and 8+4+0. The last configuration is for notebook such a high-performance platform.

The Cortex-X3, A715 and A510 V2 cores are optimized for more advanced processes, such as Samsung TSMC's 5nm and 4nm processes, and ARM provides developers with a convenient development platform and tool VFP for better simulation testing. 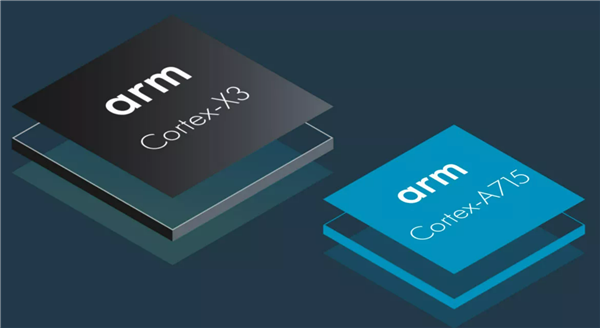 Related news
BMW releases X3 plug-in hybrid xdrive30e: to be produced in the United States
Initial exposure of millet poco X3: 5160mah battery supports 33W flash charging
Heat POCO X3 millet :65 minutes to 100% faster than competitors
Launch of Xiaolong 732g / support NFC millet poco X3 release: from 1600 yuan
Mechanical revolution deep sea Titan x3-s picture appreciation: 17.3 inch game is so small
Oppo find X3 appearance details exposure: the back camera module is similar to the iPhone 12 pro
Xiaomi overseas releases poco X3 Pro: the world's first snapdragon 860
Arm a710 and A510: 32-bit compatibility reserved for China, performance up 62%
ARM X3/A715/A510 CPU release: up to 12 cores, full 64-bit
Hot news this week
China has found 35 known cases of the new zoonotic virus Langya
Losses in a single quarter of $ 23.4 billion a record, SoftBank did not carry the plunge of technology stocks and the devaluation of the yen
The prevention and control of the American Monkey epidemic has failed. What should I pay attention to?
Is the micro -business headache? WeChat friends are suspected to have a big move: 7 can only be posted a week
Kuaishou launched a self-developed cloud intelligent video processing chip: The chip has been streamed successfully
The new product of Xiaomi MIX is coming: both internal and external dual -screen has been upgraded to make up for the previous generation.
A new zoonotic virus, Langya, found in China has not yet been confirmed to be transmitted from person to person
Ministry of Public Security: Single telecommunications network fraud continues to cause 40 % of all electrical fraud cases
Special price "kill ripe"? Bike-sharing platforms have different prices for the same package for different users
A tech company in Shanghai has been fined 220,000 yuan for swiping orders to improve its ranking on Yelp
The most popular news this week
After the U.S. chip bill takes effect, the manufacturer's snatching subsidy war is even more intense
Thousands of flights in the United States are delayed or canceled: User collapse extreme weather is frequent
Off the shelves one after another! The Sogou search App followed in the footsteps of Sogou Map
Xiaomi MIX flagship top with price reduction: consistent with the price of 12S Ultra
Semiconductor industry burst! Us Orders' Mother of All Chips' banned
Tesla suddenly accelerated out of control into a wall tragic: the owner of the right pedal and drive assistance
Lei Jun was splashed with cold water
Bubble Mart and shells increased by more than 5%.
Bridgewater closes out Alibaba in Q2? People familiar with the matter: sell Hong Kong holdings
Huawei Mate 50 series is ready to start: at least three flagships all standard in Qualcomm U