Lin Zhiying is still in a coma. The next two or three days is the key: Tesla collision was burned to the scrap iron

On the evening of July 22, Lin Zhiying's studio issued a statement to disclose Lin Zhiying's father and son. At the same time, Lin Zhiying's brother Lin Zhixin and the agent also held a press conference to thank the kind people for rescue Lin Zhiying and his son Jenson from the car.

The statement pointed out that Lin Zhiying had many injuries and fractures. At present, the Chang Geng medical team conducted surgery evaluation, and the condition could not be explained in detail for the time being. However, Lin Zhixin said that his brother is relatively stable at present, and the next two or three days will be the key. 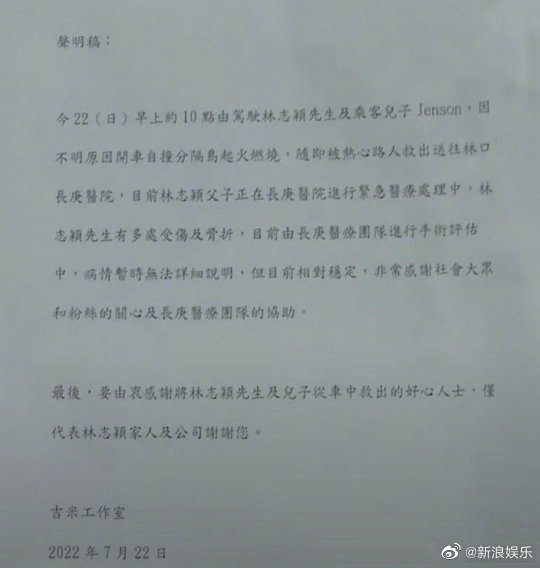 At the same time, he also expressed his gratitude to the public and fans for their care and the assistance of the Chang Geng medical team. The follow -up will further explain with the public after discussing with his family.

According to Taiwan media reports, the doctor of the treatment hospital where Lin Zhiying was located said that Lin Zhiying had a fracture of her face, a fragmented fracture on her shoulders, and a mild brain damage. However, when Lin Zhiying was very sober when she was taken to the hospital.

Lin Zhiying's injuries need to be surgery, but the specific surgery starts, and Lin Zhiying's physical condition needs to be determined. The outside world guessed that Lin Zhiying suffered the greatest impact in order to protect her son sitting in the co -pilot.

Although Jenson was frightened, he was only a minor injury. He could get out of the car by himself. With the help of a passerby aunt, he called his mother Chen Ruoyi. Lin Zhiying's family learned that the accident. 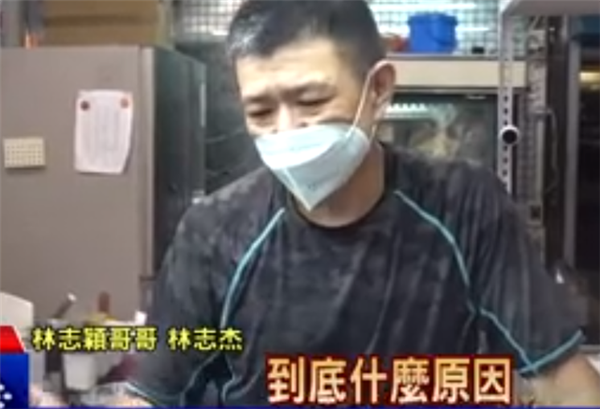 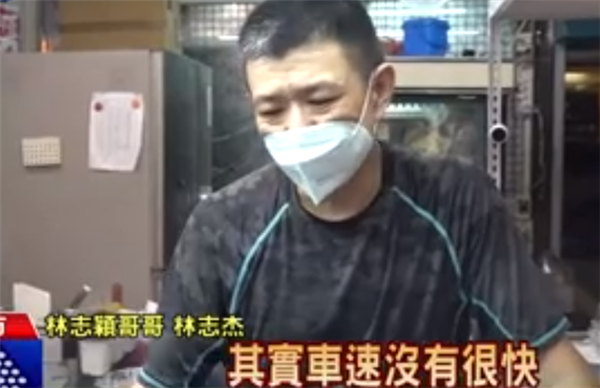 According to Taiwan media reports, Lin Zhijie revealed that his younger brother could not have surgery now, and at least two days of brain shocks had to be observed. As family members, they were also helpless, and they were as curious as the outside world. What was the reason for the car accident and everything had to wait for the police to clarify.

Lin Zhijie bluntly, & ldquo; Actually, the speed is not fast. What is the reason, no one knows. & rdquo;

Earlier, some media said that Lin Zhiying had resumed consciousness, but Lin Zhijie said that his brother was still in a coma until he left the hospital, but the situation was still stable, so his brother would return to his job post.。 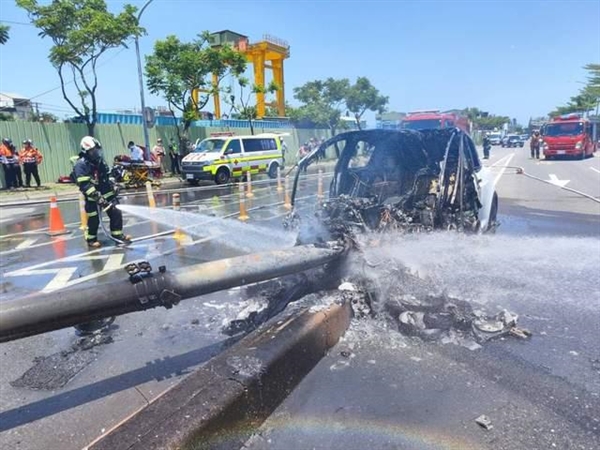 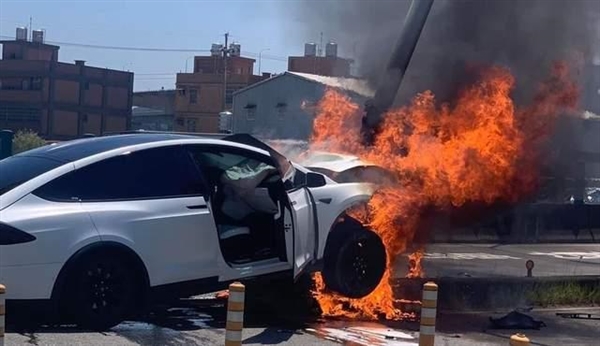 Related news
13 years of history NVIDIA gave up Tesla brand in a low-key way: name collision with electric vehicles
Tesla customer service responded to Lin Zhiying's accident: The body has no flammable material
Lin Zhiying injured face and shoulder fractures need surgery: favorite tram is Tesla
Lin Zhiying is still in a coma. The next two or three days is the key: Tesla collision was burned to the scrap iron
When Lin Zhiying drove Tesla and dragged away, the scene was fired again: Burning in the air
Lin Zhiying driving accident, why tesla?
Woman in Tesla tunnel fire: Watch it burn out
Lin Zhiying reported safety for the first time after his Tesla Model X crashed and caught fire!
In the past February, Lin Zhiying said that her body was almost recovered: the right hand was worse
Were you wearing your seat belt in the crash? Lin Zhiying's first response
Hot news this week
A small plane in the US has crashed into a 30-metre high voltage power line and got stuck: 80,000 people affected
Can recording others' wechat chat records be used as evidence? The Beijing Internet Court has an answer
Alibaba launched a new cross-border e-commerce platform in Spain, aiming to operate independently in the middle and high-end market
It's not just Huawei! Beidou has penetrated more than 20 industries and applied more than 15.5 million products
When pure water is used in China team to solve the problem of seawater hydrogen production: it is expected to become an original industry
A Tesla crashed into two cars in Taizhou, Zhejiang province, killing two and injuring one, police said
Breaking the spell of "Android 3 year must card", the new Breguet mobile phone will be sold for the first time tomorrow: from RMB3499
The appearance of Xiaomi's mini console is revealed for the first time: an all-metal body with a strong apple smell
Be careful with your phone for a long time! The aunt played with her mobile phone so much that her fingers got stuck
Google's Project Zero team accuses vendors of slacking after ARM GPU bug exposes Android upgrade woes
The most popular news this week
Why is the Apple Pencil 2 not supported? iFixit takes apart the iPad 10 to find out
Zte's experience proves that there is no way out of appeasement and peace can only be fought out
China's growing presence in the global high-tech sector is unacceptable to the US
Us to investigate Lapsus$hack, Microsoft, Nvidia and others were breached
From January to October this year, the number of global travel app downloads approached 2 billion, with China's Amap, Baidu Map and Railway 12306 taking the top three places
With the acquisition of Pulse, Mozilla will develop a new approach to machine learning
Did the United States achieve its goal? More than 40 suppliers went to the United States with TSMC
Microsoft may not be able to offer its Microsoft 365 service in German schools after two years of efforts failed
A record $50 million in compensation! In the final judgment of the dispute over the infringement of Minecraft by Mini-World, NetEase won the lawsuit
Manufacturers like Samsung and Xiaomi have been affected. Google has revealed a dangerous flaw that threatens millions of Android devices