Tesla has had another accident, this time involving race car driver Zhiying Lin.

At about 10:50 a.m. on July 22, Lin Zhiying and his son were driving a Tesla Model X on Zhongzheng North Road, Luzhu District, Taoyuan City, Taiwan Province, China, when they hit the locomotive separation island and crashed. Lin Zhiying suffered head injury and was unable to speak for a time. His son Jenson, sitting in the passenger seat, suffered face bruising. He was immediately rescued by warm-hearted passers-by and sent to Linkou Changgung Hospital. Shortly after Lin Zhiying was rescued, the vehicle exploded and burst into flames.

Responding to Lin's injuries, police said Lin suffered minor head and face injuries and was not drunk driving. Some doctors said that Lin zhiying is not in danger, but due to the severe impact, plus the damage to the face and shoulder bones, chest and abdomen should continue to be monitored. By the time the fire was put out, the $4 million (NT $) tesla locomotive was reduced to its skeleton. 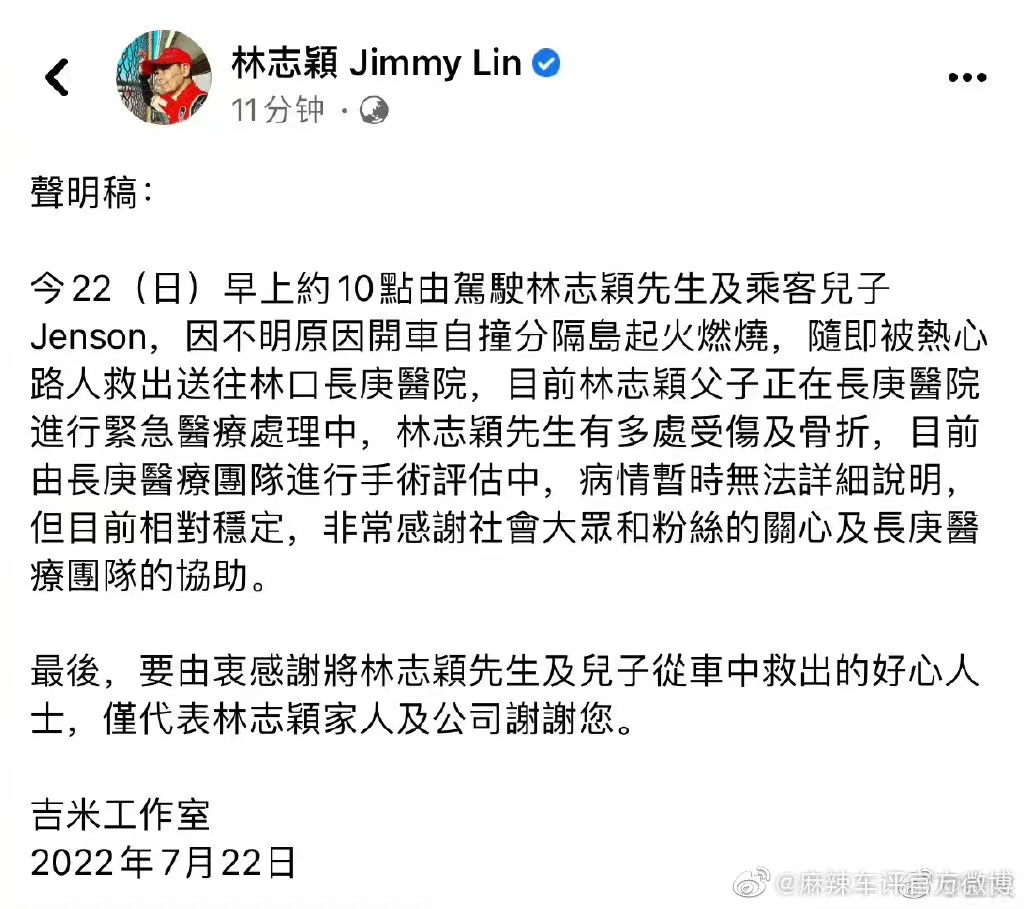 According to Peng Yuhong, the worker who rescued Lin Zhiying and his son, he heard the crash and ran to see a small fire on the front of the car. He quickly pulled Jenson out first and then Lin Zhiying, whose feet were stuck on the driver's seat, out. Peng recalled that before the passengers were pulled out, they heard explosions coming from the front of the car. Less than five seconds after the rescue, the fire spread to the driver's seat.

According to the report, when it came to the rescue situation, zhang, the engineering supervisor who joined the rescue at that time, was still scared and said, "I was still afraid", because I did not know tesla electric cars, and many of them were burning and could not put out the fire.

Lin zhiying's brother held a press conference on the afternoon of the same day (July 22), thanking the warm-hearted brave people for their help, and revealed that Lin Zhiying is currently stable, but his condition is not clear, the next two or three days is the focus.

This caused a heated discussion among netizens.

"Never mind the brakes, I'm afraid to drive a car that catches fire after a low-speed collision."

"In my impression, Lin Zhiying is a racing car player, and his driving skills are more than 95% higher than those present. Even he had an accident, which means there is something wrong with the car."

"It doesn't really matter if you hit it. It burns so fast. There's no washing."

Others stand on the father's point of view, that the child is still in the car, Lin Zhiying's probability of driving distraction is very small, "I am also the owner, I will not have a baby under the circumstances of drag racing."

Some netizens on Zhihu have already speculated about Tesla's next response, believing that there is a high probability that something went wrong while using the so-called autopilot. The car went down the lane into a lane free section of the road, did not see any reaction, and crashed into a pillar straight ahead.

In response to the overwhelming discussion, Tesla customer service said, "We cannot confirm the cause of the fire at the moment. In case of emergency, the main and co-pilot have mechanical door device, which can unlock the door forcibly in case of power failure, and the rear passengers can escape through the trunk." The customer service officer also said there were no flammable materials near the driver's seat.

Tesla's first known accident, and the first known fatality since its current Autopilot technology was applied, occurred in 2016, when a Tesla Model S in the United States crashed while driving on Autopilot, resulting in the driver's death.

In 2019, two people were killed in a car accident in the US. Tesla's Autopilot function, which failed to recognize and brake at a red light, failed to take over the steering wheel at a red light and the car ran a red light, causing a collision. Two people in the Honda Civic were killed and the driver and passenger in the Tesla were injured. After the crash, the bereaved family accused the driver of negligence in the accident and blamed Tesla for selling a defect that caused sudden acceleration and failure to activate automatic emergency braking, ultimately leading to a fatal accident.

In the case, the National Highway Traffic Safety Administration said that while automated systems can help drivers avoid crashes, drivers must use the technology responsibly.

Since 2016, the US National Highway Traffic Safety Administration (NHTSA) has sent teams to investigate 26 accidents involving Tesla's Autopilot system, including at least 11 deaths.

On July 20, Musk said during Tesla's second quarter earnings call that the best ev manufacturer in China right now is Tesla. The Shanghai plant, recently upgraded to produce more than 750,000 vehicles a year, is Tesla's current gigafactory, according to earnings reports.

Related news
Tesla customer service responded to Lin Zhiying's accident: The body has no flammable material
Lin Zhiying injured face and shoulder fractures need surgery: favorite tram is Tesla
Lin Zhiying is still in a coma. The next two or three days is the key: Tesla collision was burned to the scrap iron
When Lin Zhiying drove Tesla and dragged away, the scene was fired again: Burning in the air
Lin Zhiying driving accident, why tesla?
Car driver not wearing seat belt?
Lin Zhiying reported safety for the first time after his Tesla Model X crashed and caught fire!
In the past February, Lin Zhiying said that her body was almost recovered: the right hand was worse
Lin Zhiying has made his first appearance since crashing his Tesla Model X
Were you wearing your seat belt in the crash? Lin Zhiying's first response
Hot news this week
A small plane in the US has crashed into a 30-metre high voltage power line and got stuck: 80,000 people affected
Can recording others' wechat chat records be used as evidence? The Beijing Internet Court has an answer
Alibaba launched a new cross-border e-commerce platform in Spain, aiming to operate independently in the middle and high-end market
It's not just Huawei! Beidou has penetrated more than 20 industries and applied more than 15.5 million products
When pure water is used in China team to solve the problem of seawater hydrogen production: it is expected to become an original industry
A Tesla crashed into two cars in Taizhou, Zhejiang province, killing two and injuring one, police said
Breaking the spell of "Android 3 year must card", the new Breguet mobile phone will be sold for the first time tomorrow: from RMB3499
The appearance of Xiaomi's mini console is revealed for the first time: an all-metal body with a strong apple smell
Be careful with your phone for a long time! The aunt played with her mobile phone so much that her fingers got stuck
Google's Project Zero team accuses vendors of slacking after ARM GPU bug exposes Android upgrade woes
The most popular news this week
Why is the Apple Pencil 2 not supported? iFixit takes apart the iPad 10 to find out
Zte's experience proves that there is no way out of appeasement and peace can only be fought out
China's growing presence in the global high-tech sector is unacceptable to the US
Us to investigate Lapsus$hack, Microsoft, Nvidia and others were breached
From January to October this year, the number of global travel app downloads approached 2 billion, with China's Amap, Baidu Map and Railway 12306 taking the top three places
With the acquisition of Pulse, Mozilla will develop a new approach to machine learning
Did the United States achieve its goal? More than 40 suppliers went to the United States with TSMC
Microsoft may not be able to offer its Microsoft 365 service in German schools after two years of efforts failed
A record $50 million in compensation! In the final judgment of the dispute over the infringement of Minecraft by Mini-World, NetEase won the lawsuit
Manufacturers like Samsung and Xiaomi have been affected. Google has revealed a dangerous flaw that threatens millions of Android devices