How long has it been since you bought a blind box? Share price halved, bubble Mat's "bubble" broke 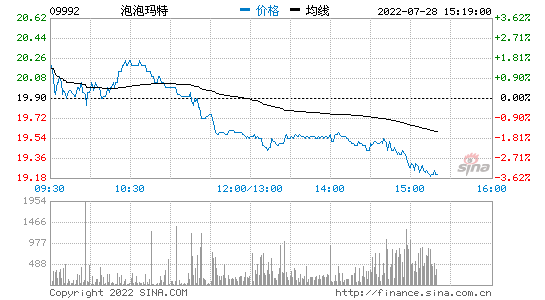 How long has it been since you bought a blind box? The stock price and performance of PopMart (9992.HK) may answer that question.

On July 28, Bubble Mart fell to HK $19.44 per share intraday, the stock price hit a record low. In fact, the company's share price has fallen nearly 50% in the past month.

The low share price and corporate performance can not get away with it. Popmart's first-half revenue is expected to grow no less than 30 percent, but net profit unexpectedly will fall no more than 35 percent. This is listed since, bubble Mat first appeared net profit decline.

Revenue scale up and net profit down, what happened to the bubble Mart? Can the stock return to its highs in the future?

The heat of the blind box decreases 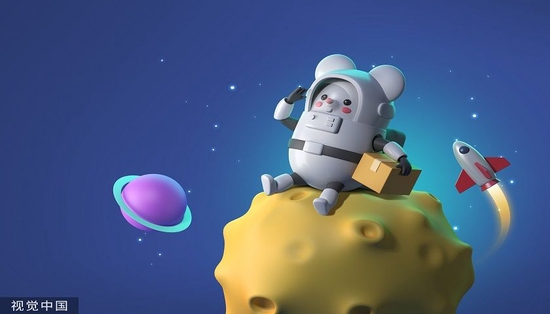 Popamat said it suspended offline stores and robot stores in some areas in the first half of the year due to the outbreak control. In addition, the epidemic has also affected the timeliness of logistics in some regions, thus affecting online sales.

In addition to the impact of the epidemic, the decline in popularity of blind box consumption can not be ignored. In 2020 and 2021, the growth rate of operating revenue of Popmart was 49.25% and 78.83%, respectively. In the first half of this year, the growth rate of revenue declined significantly.

What's more, Pop-Mart seems to be spending an "astronomical amount" on marketing, which underscores the decline in the popularity of blind boxes.

From the blind box marketing to the launch of the big baby, in fact, is a forced step of the bubble Mat. But "big baby" itself also poses a bigger test of IP durability. In view of the current performance, the results of bubble Mart are not ideal.

According to the 4.5 billion yuan operating revenue estimate of Popomat at the end of 2021, if each blind box is 60 yuan, about 75 million blind boxes need to be sold. Such sales figures are extremely difficult to achieve, given the limited number of people who can accept "blind box" play. The "big baby" is priced at 599 to 799 yuan, and the 1000% version of the "big baby" is sold for more than 5,000 yuan. Moreover, the hidden spending habits behind the big baby are very different from those behind the blind box. The launch of the big baby not only opened the revenue space of the bubble Mat, but also positioned the company from the "blind box" this gambling quality of the game transfer to a more potential "tide play" industry.

The higher-priced Dawa are clearly more dependent on the popularity of the IP. In recent years, PopMart has ramped up the development of its own IP, and while some, like SKULLPANDA, have performed well, their durability remains to be tested. This comes after Bubble Mart's once-popular PUCKY segment suddenly fell in 2021, with revenue plunging 39%. The remaining two IP's -- Molly and Dimoo -- achieved operating revenue of 705 million yuan and 567 million yuan in 2021, respectively, up 97% and 80% year on year.

In the first half of this year, there are also some new trends in the marketing of bubble Mart to watch. Companies are increasingly launching new lines of "co-branded" models, which could increase IP expenses. For the "big baby" marketing, bubble Mat also basked out a lot of stars and a variety of "big baby" photo, the formation of a topic, drive people "stir baby" enthusiasm. This backside highlighted the flow of bubble mat own IP may have been overdrawn, have to use "joint money" or star flow drainage.

The sustainability of IP has always been a sword of Damocles hanging over BubbleMatt's head. Now the problem has finally flared up. The market is also reconstructing Bubble Mart's valuation, with analysts quietly lowering their expectations for the company. At the beginning of the year, Wind's consensus forecast for 2022 operating revenue was 7.1 billion yuan on average. By mid-year, that had fallen to 6.5 billion yuan. In terms of net profit, Wind consensus expects that the average annual net profit of bubble Mart in 2022 is 1.16 billion yuan, but from the net profit of Bubble Mart in the first half of this year, this goal is quite difficult to achieve.

If the net interest rate of the first half of the year is forecasted, Bubble Mart's net profit for the full year is only about 650 million yuan. Optimistic estimate, bubble Mat in the second half of the year will reduce the cost of sales investment. If based on last year's net interest rate estimate, bubble Mart this year's net profit of about 1.2 billion yuan. At its current market capitalisation of HK $27.3bn, Popmart's 2022 price-to-earnings valuation is between 20 and 37 times, hardly a bargain.

Related news
Google introduced Nearby Share file sharing for Chrome OS
How i got back my Lover
HOW I WON BIG
+2349031459947 # HOW TO JOIN OCCULT WITHOUT HUMAN SACRIFICE
¶∆¶+2348034806218¶∆¶HOW TO JOIN ILLUMINATI FOR WEALTH IN DUB
How long has it been since you bought a blind box? Share price halved, bubble Mat's "bubble" broke
#%2348026461693 I WANT HOW TO JOIN SECRET OCCULT FOR MONEY
Hot news this week
Apple is recruiting neurorendering research scientists to create immersive experiences for AR/VR products
Tesla China will take the initiative to significantly reduce production if it still fails to sell by 40,000 yuan
The Internet reported that the Shanghai factory would voluntarily cut production by 20%, Tesla responded
Hangzhou Internet Court: NFT digital collection belongs to the network virtual property, protected by law
Amazon has withdrawn a new offer from its retail division, cutting off new employees who were due to start early next year
You know what? Looking at your phone while driving is the equivalent of driving blind for about 50 meters, which is extremely dangerous
The United States has approved the first fecal transplant to treat disease by transplanting someone else's feces
Dalitsu, a lens supplier for Apple's iPhone 14, reported revenue of NT $5.231 billion in November, up 20 percent from a year earlier
Transsion Holdings: Established a global strategic partnership with Google to carry out in-depth cooperation in areas such as Android system
Do the most lightweight and smooth system! - MIUI 14 will come soon: The flagship will also be upgraded two years ago
The most popular news this week
Activision Blizzard CEO says Microsoft acquisition will go ahead, FTC allegations are factually incorrect
Experts: do not take ibuprofen if you eat Lianhua Qingdian, separate Chinese and Western medicines
Up to 56 cores! The new generation of Intel processors is coming.
Upgrade second regret! Serious problems after AirPods Pro 2 update
Apple got Sony's flagship sensor! iP15 is now more expected
Ibuprofen does not have to compete for the world's largest production capacity in China: one company is enough for 3.3 billion people.
QQ level first in the world! I responded to make netizens envious: the family opened the Internet cafe
Cook's "no" to Musk: cost Apple 4.4 trillion
AI paintings fetch a record price of 1.1 million! Baidu's AI painting was tested and the result was amazing
Burst! Tesla China discontinues Model Y production