July China Mobile Games Distributor Global Revenue List: The first three are not expected to be

Special explanation: This report only counts the revenue of the issuer, and does not include the third -party Android channel in China.

With the opening of the SS19 season, the "Peace Elite" revenue in July increased by 23%, and the "League of Legends E -sports Manager" was listed on July 20, which caused Tencent Games to increase by 6%month -on -month.

"Wilderness" daily service launched a wealth of summer activities in July, with twice the income of this issue of June. On July 25, "Diablo: Immortal" was successfully listed in the domestic market, and quickly ranked among the top three in the best -selling list of iOS mobile games in China. Driven by these two games, the revenue of NetEase games increased by 6.8%month -on -month.

In this summer, the Thunder Game launched another childhood IP mobile game "Obi Island: Dream Country". In mid -July, the game was listed on the top six of the domestic iOS mobile game best -selling list, and the issuer's current income increased by 16.8%month -on -month. 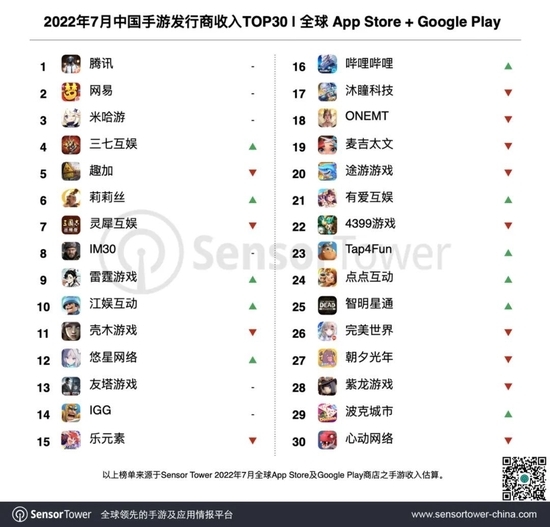 Due to the significant increase in the revenue of the daily service version of "Blue Archives" and "Tomorrow's Ark", the revenue of Youxing's network in this issue has increased by 72%month -on -month, ranking 8th to 12th.

Thanks to many categories such as chess cards, leisure, and RPG, Polk's city revenue began to enter the rapid rise in 2020. In July of this year, the revenue reached 3.75 times in the same period in 2020, ranking 78th in the revenue list of global mobile game publishers, and entered the TOP30 of the revenue list of Chinese mobile game publishers for the first time. The top three markets in this issue are Indonesia, the United States and China, accounting for 38.6%, 26.2%and 23%, respectively.

The "Double Pahash" released by the hero game in July held a summer event and the first anniversary celebration in Chinese, Japan and South Korea, and English. 84th in the revenue list of global mobile game publishers.

Although this summer, there are "League of Legends E -sports Manager", "Diablo: Immortal" and "Obi Island: Dream Country" and other masterpieces. The month is basically the same, compared with the peak value of April this year, and a 10%decrease from the same period last year. This status quo is also in line with the trend of the overseas mainstream mobile game market in the later stage of the epidemic. 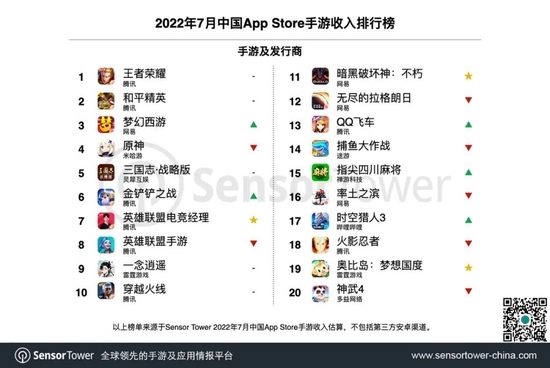 The other two games with significant increases in this period are "QQ Speed" and "Fingertips Sichuan Mahjong", which have achieved 85% and 87% growth of 85% and 87%, respectively.

Related news
Epic Games accused Google of monopolizing the latter, which may have a better chance than apple
Analyst: Epic Games vs. Apple makes it harder for developers to win against Google
Support EPIC GAMES Microsoft: If you don't stop Apple now, you will only get more serious
The territory was further expanded with Tencent's wholly-owned acquisition of Canadian Studios Infant Games
Netflix announced 65 million euros to acquire Finnish game developers next Games
What is the logic behind the proposed €65 million acquisition of Next Games Netflix?
Sony, Lego parent company invested heavily in Epic Games, how did the game engine business grow?
Telecom Operators Essential for the Metaverse:China Mobile Chairman
Hot news this week
"Sheep a sheep" fire, is expected to attract hundreds of millions of financing? But it doesn't have a license...
The first "zero carbon factory" in the ICT industry, Lenovo (Tianjin) Smart Innovation Service Industrial Park is officially put into production
Baidu Ping Xiaoli: The repurchase rate of users on Baidu App reached 60%, and the daily inquiries exceeded 4 million
Billions of euros in investment, Intel Italy chip factory will be located in the Veneto region, sources said
"Sheep a sheep" the whole network burst fire! The founder was the Alma mater system of exhibition card publicity
Huawei Mate50 is on sale: Kunlun glass version is difficult to find, the maximum price increase of the Porsche series
Tencent Music back to Hong Kong behind: online music "internal volume" intensification, short video will become a new growth rate
Intel failed to deliver on its promise: Summer is over and there's still no high-end, flashy desktop graphics cards
Xiaomi Civi 2 Stable Snapdragon 7:23 87mm2 Large-area VC liquid cooling, heat dissipation increased by 200%
"Look at the weather why do I need to renew membership"? Inkblot Weather membership service is a hot topic
The most popular news this week
Huawei Smart Screen portable version released: 10.4-inch 2K screen, 10995mAh battery
The world's first 6GHz frequency Intel high-profile announcement: the lead is indisputable
Do you have the opportunity to take noise -canceling ear to damage the hearing? Experts from the Three Hospital said that
Jump ticket 2 years "pigeon king"! Avx-512 is publicly supported for the first time in the Intel 60 core
I can't afford to live without Musk's help
Mobile phone fast charge new volume king Xiaomi three new machine into the network: the highest 210W?
Secretary -General of the Federation of Federation: Foreign artificial artificial Chinese online red cars have great advantages in China
Do you want to travel to space? Aerospace expert: China already has technical conditions
The strong response to the iPhone 14 Pro Max could widen the gap between the iP15 Pro series
Intel's Arc A7 flagship graphics card debuts in private: Just these two