The Chip and Science Act, which has been getting a lot of attention recently, includes a $52.7 billion subsidy for the semiconductor industry and a restriction that prohibits companies receiving federal funds from increasing production of advanced process chips in China.

On Tuesday, after Mr. Biden signed the Chip and Science Act, the White House released a briefing on the situation.

In addition to outlining the contents and implications of the Chip and Science Act, the fact sheet notes that the President's Council of Advisers on Science and Technology (PCAST) issued new recommendations on semiconductor research and development,"Propose to develop Chiplet Platform, enabling startups and researchers to innovate faster and at lower cost." 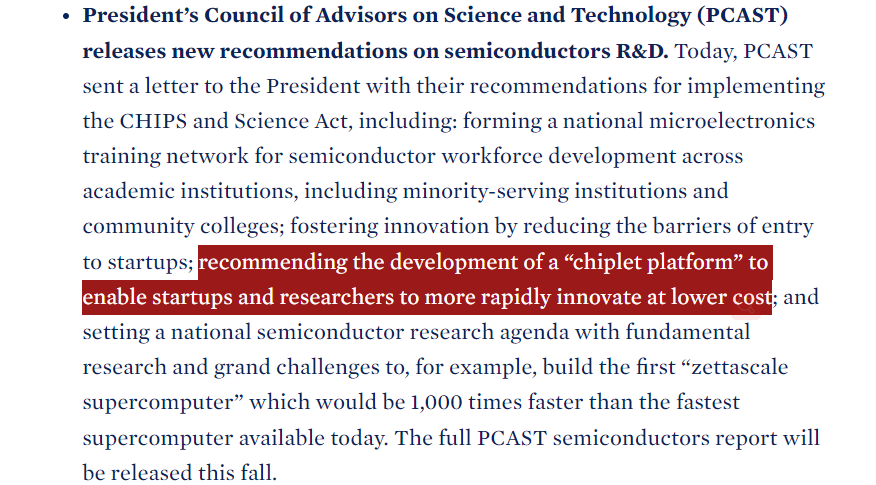 The full proposal, published on PCAST's website, offers a glimpse of what the so-called Chiplet Platform will look like.

Fostering innovation: Developing a new semiconductor product requires an investment of hundreds of millions of dollars, a cost that many startups and academic researchers cannot afford. To reduce entry costs, we would recommend that a portion of the Chip and Science Act funding be used to provide financial support for startups and academic researchers, as well as the necessary access to prototype tools and facilities. Making these resources available can level the playing field and restore healthy competition to markets.

We will also propose the development of a "Chiplet platform" -- a chip that includes common, non-innovative parts of a product -- to enable startups and academic researchers to innovate faster and dramatically reduce their development costs.Other countries, particularly in Asia, are investing to reduce market entry costs and seeing results. For example, six times as many semiconductor startups are created in China each year as in the United States. We believe that investing in these domestic shared resources is essential to reverse this trend.

It can be seen that the Chiplet platform proposed by PCAST has nothing to do with the popular Chiplet technology itself in China.

The concept of Chiplet, which is popular in the domestic secondary market, refers to the packaging technology that encapsulates multiple module chips together with the underlying basic chip to form a system chip.

Chiplet itself is a high-performance, low-cost, fast-to-market solution that assembles multiple chips in a single package. thusAs a metaphor, PCAST suggested that the U.S. government build a platform that would allow startups to lower development costs and make it easier to get to market.

In fact, Chiplet technology is not a new concept. In the past few years, several international head chip design companies such as AMD, Intel, and TSMC, as well as several Chinese chip design companies, have demonstrated or implemented Chiplet design into their products. Thus, PCAST's mention of Chiplet in its proposal is not new either.

Related news
Chinese core from A-share reactor
Big house saves money! RMB 299 millet, ax1800 can be matched with ax3600 mesh
Why are Hong Kong stocks listed in Jingdong and Netease back to Hong Kong not a shares?
No matter how big house is, it can sweep everywhere! Evaluation of Mijia sweeping robot 2
Anti-COVID-19 vaccine rhetoric has sparked outrage spotifying Joe Rogan's podcast content
Joe Biden also mentioned Chiplet? An unexpected A-share buzzword in A White House briefing
The next five years will be the key period for localization of Chiplet to change lanes and overtake cars
Hot news this week
"Sheep a sheep" fire, is expected to attract hundreds of millions of financing? But it doesn't have a license...
The first "zero carbon factory" in the ICT industry, Lenovo (Tianjin) Smart Innovation Service Industrial Park is officially put into production
Baidu Ping Xiaoli: The repurchase rate of users on Baidu App reached 60%, and the daily inquiries exceeded 4 million
Billions of euros in investment, Intel Italy chip factory will be located in the Veneto region, sources said
"Sheep a sheep" the whole network burst fire! The founder was the Alma mater system of exhibition card publicity
Huawei Mate50 is on sale: Kunlun glass version is difficult to find, the maximum price increase of the Porsche series
Tencent Music back to Hong Kong behind: online music "internal volume" intensification, short video will become a new growth rate
Intel failed to deliver on its promise: Summer is over and there's still no high-end, flashy desktop graphics cards
Xiaomi Civi 2 Stable Snapdragon 7:23 87mm2 Large-area VC liquid cooling, heat dissipation increased by 200%
"Look at the weather why do I need to renew membership"? Inkblot Weather membership service is a hot topic
The most popular news this week
Huawei Smart Screen portable version released: 10.4-inch 2K screen, 10995mAh battery
The world's first 6GHz frequency Intel high-profile announcement: the lead is indisputable
Do you have the opportunity to take noise -canceling ear to damage the hearing? Experts from the Three Hospital said that
Jump ticket 2 years "pigeon king"! Avx-512 is publicly supported for the first time in the Intel 60 core
I can't afford to live without Musk's help
Mobile phone fast charge new volume king Xiaomi three new machine into the network: the highest 210W?
Secretary -General of the Federation of Federation: Foreign artificial artificial Chinese online red cars have great advantages in China
Do you want to travel to space? Aerospace expert: China already has technical conditions
The strong response to the iPhone 14 Pro Max could widen the gap between the iP15 Pro series
Intel's Arc A7 flagship graphics card debuts in private: Just these two