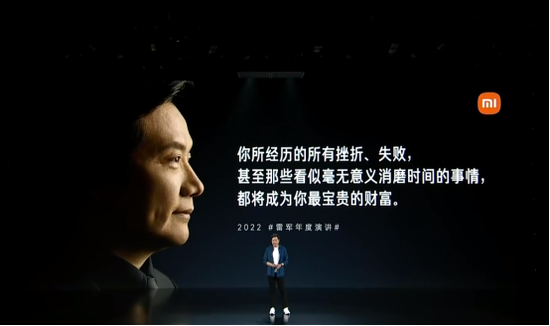 In other words, in the past two years, entrepreneurs of various technology Internet companies are quite low -key, and rarely have high -profile sounds, while Lei Jun is a alien among older entrepreneurs -so far on the front line The company and individuals are tied up closely together, and they can make a personal speech. No, last night, Lei Jun's annual speech was swiped on the Bida Friends Circle of the Eight Sister.

However, in this kind of public opinion environment, Lei Jun, who dares to speak and remember bitterness, has a lot of fans, but also caused objections. For example, some people think that Lei Jun's speech is to use the general public to the public. The favorite chicken soup to market its own products; some people think that ordinary people have a sense of alienation when they listen to Lei Jun to talk about the trough. After all, the trough of rich entrepreneurs also has countless retreats.

In addition, today, Ren Zeping, an Internet celebrity economist, also poured a pot of cold water for Lei Jun. The eight sisters still think it is quite interesting.

Mr. Ren Zeping first talked about the love of Lei Jun and Xiaomi, but he also believed that he should not be deified Lei Jun. He also believes that "the gap between Lei Jun against Jobs and Musk has a lot of gaps." He said that he was full of expectations for Lei Jun, but he did not want public opinion to kill prematurely. , Go forward bravely. 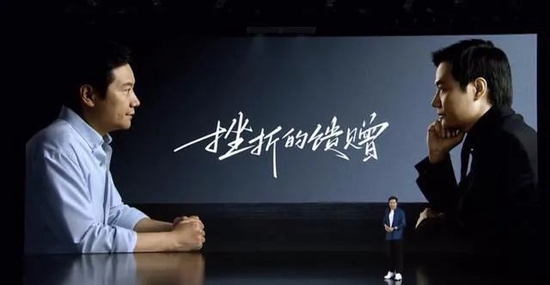 Ren Zeping also pointed out, "Lei Jun and Xiaomi have hidden concerns. The speed of burning money in new energy vehicles may be far beyond other industries, far more imagination, and it is a life of nine deaths. The bottom gas and cash flow of Xiaomi cars comes from the steady stream of cash flow from Xiaomi mobile phone business, but the revolutionary innovation of the global mobile phone industry has come to an end, entering the mature period, entering the Red Sea period, users also enter the aesthetic fatigue period, enter the decline in sales, In the current period, will the smartphone be faced with 'Nokia Moment' one day? Can Xiaomi mobile phone still support the car building at that time? "

Ren Zeping also accused the president of Wuhan University, "Wuhan University President Qu Lei Jun is the most handsome among entrepreneurs, the richest among handsome guys'. His mood can be understood and values are questionable." 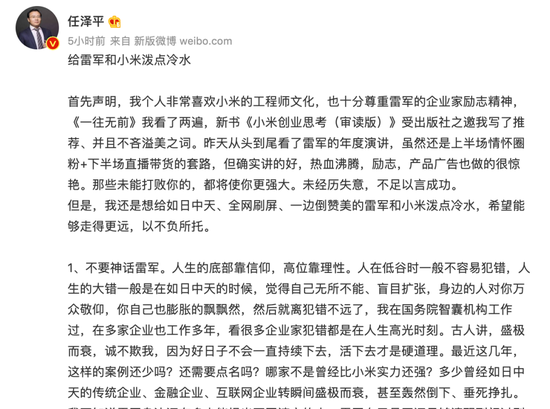 Ren Zeping seems to be very small for Xiaomi and Lei Jun's current marketing methods. He said: "The traffic is a double -edged sword. The traffic and influence do not belong to someone. A business is a trust and entrustment of society to promote social progress. It is very terrible. How many people will hold you today and how many people will step on you tomorrow. You hang the public's expectations too high. As a result, if you are disappointed, will it be scolded? Overall, our society is still a king defeat. The culture gives the successful people with too many halo, and it is not tolerant of the loser enough. The iron must be hard to hit the iron. The self -media marketing is just a means. The excellent product power, technical strength, values, and great dreams can cross the vortex of public opinion. Marketing requires the strong delivery of the back end as a support in order to be stable and far away. "

Well, seeing Ren Zeping's cold water splashed with Lei Jun, the eight sisters felt cold sweat. This year, it is not easy to be an entrepreneur. It is necessary to be a public speech and read some chicken soup.

Of course, Ren Zeping, as the "most expensive economist", has also caused doubts. In December 2017, Ren Zeping joined Evergrande for 15 million years of salary. In March 2021, he filed a resignation. Great and influence are unprecedented. The influence of Ren Zeping's influence on Evergrande was also questioned. On September 6, 2021, Economist Liu Shengjun wrote an article called "Three years ago, Xu Jiayin mistakenly taken a medicine called" Ren Zeping ", and bluntly said that Ren Zeping's bloody" flickering "was" flickered ". The difficult situation of Evergrande now. It is also called "rivers and lakes liar". However, Later, Ren Zeping also responded that he had realized the problem of Evergrande and began to write a report, but unfortunately, the suggestion was not adopted.

(Disclaimer: This article only represents the author's point of view, and does not represent the position of Sina.com.)

Related news
Lei Jun's cellphone screen saver was exposed. I personally praised netizen: a little cute
Lei Jun: if Xiaomi doesn't need me, it's time for me to retire
Lei Jun said that "at the age of 40, he felt he had accomplished nothing" netizen: Versailles
Lei Jun was splashed with cold water
Lei Jun: I want to be a great person! Xiaomi wants to affect the world, we are forced by our car building
Hot news this week
"Sheep a sheep" fire, is expected to attract hundreds of millions of financing? But it doesn't have a license...
The first "zero carbon factory" in the ICT industry, Lenovo (Tianjin) Smart Innovation Service Industrial Park is officially put into production
Baidu Ping Xiaoli: The repurchase rate of users on Baidu App reached 60%, and the daily inquiries exceeded 4 million
Billions of euros in investment, Intel Italy chip factory will be located in the Veneto region, sources said
"Sheep a sheep" the whole network burst fire! The founder was the Alma mater system of exhibition card publicity
Huawei Mate50 is on sale: Kunlun glass version is difficult to find, the maximum price increase of the Porsche series
Tencent Music back to Hong Kong behind: online music "internal volume" intensification, short video will become a new growth rate
Intel failed to deliver on its promise: Summer is over and there's still no high-end, flashy desktop graphics cards
Xiaomi Civi 2 Stable Snapdragon 7:23 87mm2 Large-area VC liquid cooling, heat dissipation increased by 200%
"Look at the weather why do I need to renew membership"? Inkblot Weather membership service is a hot topic
The most popular news this week
Huawei Smart Screen portable version released: 10.4-inch 2K screen, 10995mAh battery
The world's first 6GHz frequency Intel high-profile announcement: the lead is indisputable
Do you have the opportunity to take noise -canceling ear to damage the hearing? Experts from the Three Hospital said that
Jump ticket 2 years "pigeon king"! Avx-512 is publicly supported for the first time in the Intel 60 core
I can't afford to live without Musk's help
Mobile phone fast charge new volume king Xiaomi three new machine into the network: the highest 210W?
Secretary -General of the Federation of Federation: Foreign artificial artificial Chinese online red cars have great advantages in China
Do you want to travel to space? Aerospace expert: China already has technical conditions
The strong response to the iPhone 14 Pro Max could widen the gap between the iP15 Pro series
Intel's Arc A7 flagship graphics card debuts in private: Just these two