The first Beta version of Apple's iOS 16 had some compatibility issues with TestFlight, which were later fixed in an update. Now Mac users running macOS 13 Ventura Beta 5 are also experiencing TestFlight issues, no longer allowing users to install or update Beta apps. 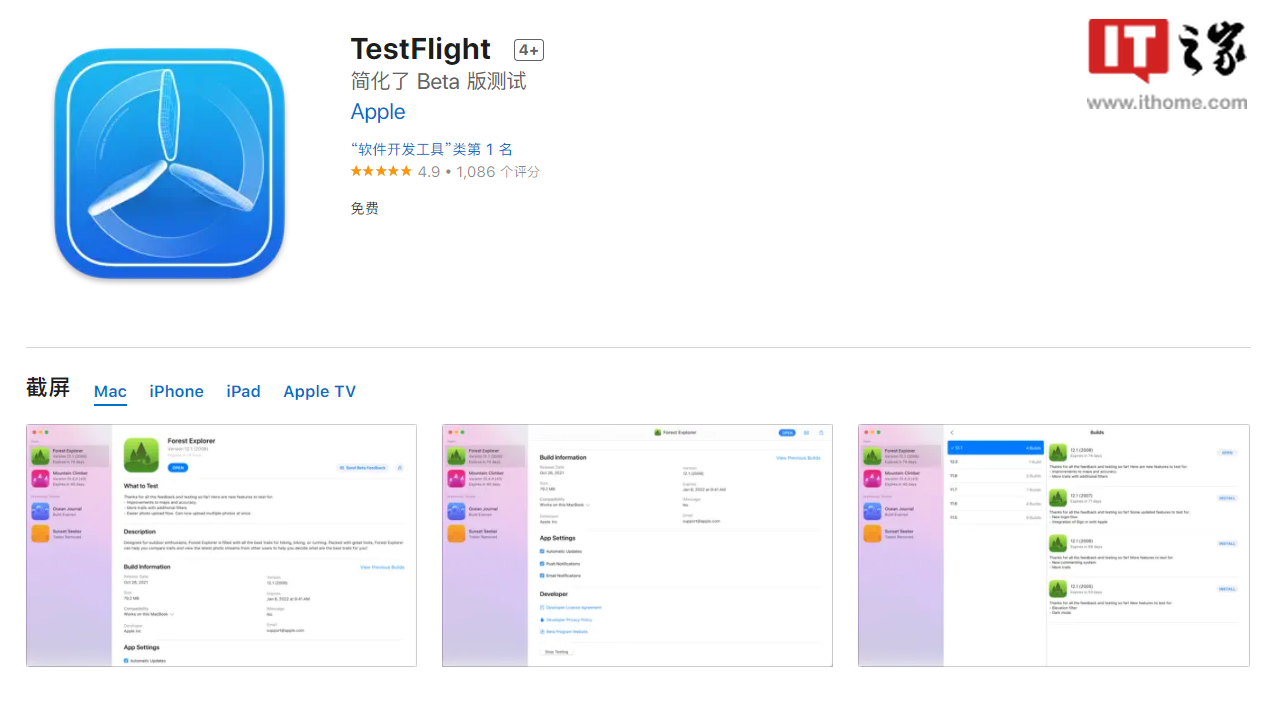 TestFlight is an Apple-owned platform that lets you easily test Beta versions of macOS apps and provides valuable feedback to developers before they release their apps to the App Store. Testers are invited via email or a public link.

The House of IT has learned that with the development of macOS 13 Ventura, a number of developers have submitted Beta versions of their applications containing new features ready for macOS 13.

The TestFlight issue appears to have affected nearly all Mac users running the latest Beta 5 Beta of macOS 13 Ventura, which was released to developers on August 8. But Apple hasn't released any updates to the macOS Ventura Beta since, and the iOS 16 Beta has been updated twice in the same period.

This incompatibility problem forces users to replace the Beta application with a regular release, since each Beta release has a 90-day time limit before it expires. Since the TestFlight app no longer works and the beta app stops working after it expires, there's nothing users can do about it. 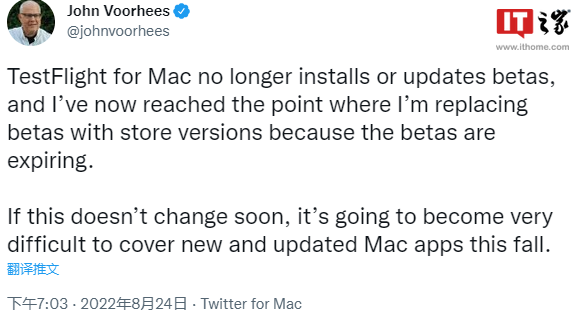 Developers have been complaining about the same bugs. After clicking to install or update the Beta app, TestFlight downloads the app, but nothing else happens. As a result, developers will not be able to get feedback from users on new versions of their applications.

It is unclear what caused the TestFlight error on macOS, and Apple has not commented. Similar to the iPadOS 16, the macOS 13 Ventura is expected to be released to the public later this year.

Related news
Not only windows: Mac OS updates can also cause data loss
All eyes on you! Apple macOS 13 Ventura Public Beta 2 release!
MacOS Ventura feature page removes third-party app 'Hide My Email'
MacOS 12.5.1 has been released
More and more Intel processors are removed by Apple MacOS: folk gods are trying to crack
TestFlight encountered problems in Apple macOS 13 Ventura Beta 5
Apple Safari Technical Preview Version 154 released: Compatible with macOS 13 Ventura, fixes inability to play WebM
Hot news this week
With the NIL technology, Canon wants to provide China with a lithography machine comparable to the EUV
The Long March 9 is basically confirmed: the low-orbit carrying capacity of 150 tons can carry the entire space station into space
A small plane in the US has crashed into a 30-metre high voltage power line and got stuck: 80,000 people affected
Alibaba launched a new cross-border e-commerce platform in Spain, aiming to operate independently in the middle and high-end market
Can recording others' wechat chat records be used as evidence? The Beijing Internet Court has an answer
Google is concerned that Microsoft's acquisition of Activision Blizzard will affect the ChromeOS experience
When pure water is used in China team to solve the problem of seawater hydrogen production: it is expected to become an original industry
It's not just Huawei! Beidou has penetrated more than 20 industries and applied more than 15.5 million products
The second generation Snapdragon 8 flagship! Mi 13 toughened film appeared: four sides and other narrow screen accounted for a stable ratio
A Tesla crashed into two cars in Taizhou, Zhejiang province, killing two and injuring one, police said
The most popular news this week
Intel says key issues with U.S. chips have been resolved
RTX 4090 card into PPT 3A game masterpiece apology urgent update patch
Transsion will be holding a launch event in Dubai in addition to mobile phones and laptops
The first Snapdragon 8 series phone in the popular colors of 2023 hits the shelves: a stunning 5600 yuan design
Why do laptops need more memory?
Increase production capacity! Apple speeds up iP14 Pro shipments: Arrive as soon as New Year's Day 2023
What a fan! Netizens spend ten thousand yuan to get three mobile phones at once: beautiful
A bachelor's degree is needed for a New York City rat control manager who earns 1.2 million yuan a year
4090/80 Take that! Third party pre-orders for AMD RX7900: The most expensive over 11,000
Mi 13 series press conference preview: It is likely to start 3999