Google is shutting down its Stadia cloud gaming project, with the developers involved saying they had no knowledge of the plans

Google announced today that IT's shutting down Stadia, its cloud gaming service. While IT came as a surprise to many, IT also makes sense. Stadia has some great games, but IT's not cost-effective, and IT suffers from video compression, input latency, and other network issues. You have to pay full price to buy games on the platform, you have to pay additional subscription fees to play games in 4K resolution, and Google's own Stadia game development studio was hastily shut down after just a year. 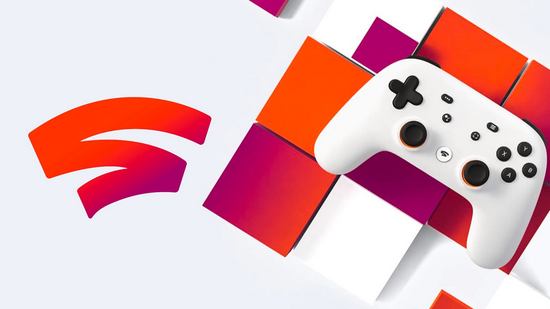 It's so typical of Google that there's even a website dedicated to the products Google has killed. That kind of assertiveness may be one reason why Google is now worth more than $1 trillion, but it's not good news for some consumers and game developers. Although they will get a refund, Stadia users will lose access to their games and will lose the corresponding game progress archive. Meanwhile, game developers who make Stadia versions of their games are wasting their time, and PC Gamer reports that a number of Stadia developers on Twitter are saying that they've only just learned that Stadia is closing.

Here's how the game industry reacted to the news:

"The developers at Stadia have created a development platform that has allowed us to continue to create and evaluate Destiny 2 at home over the past few years," said Joe Blackburn, Destiny 2 game director. I'm sure it's been a tough day for a lot of people. Thank you for helping us with the game." 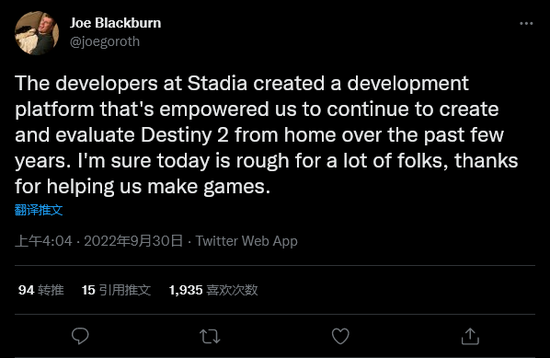 "It's fair to say that Google Stadia has been in dire straits over the past three years and has had to deal with: - The global pandemic has forced people to turn to online entertainment," said Aadit Doshi, a veteran game program at Rocksteady, the developer of the Batman: Arkham series. - Shortage of graphics cards and game consoles, leading to high demand for alternatives. It would be nice if they could enter the market at a better time." 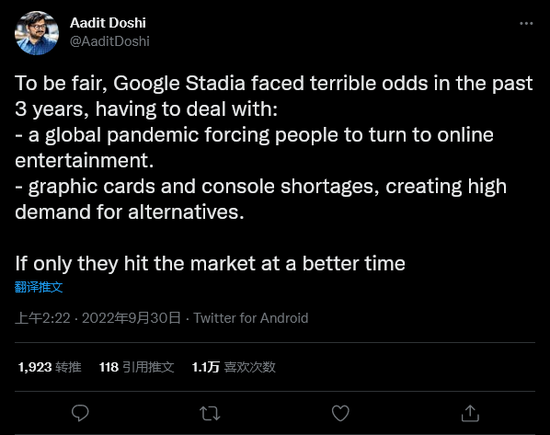 According to Brandon Sheffield, Necrosoft's developer revenue share for Stadia is "the best of all cloud gaming services," even though it's a joke to many. The news that their game Hyper Gunsport is set to launch on the platform in November and will recoup their development costs is a huge blow to them. 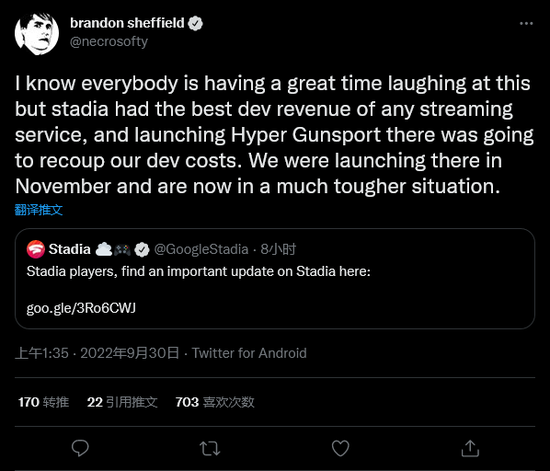 Tim Sweeney, CEO of Epic, said he believes that Google Stadia is a very solid and positive effort and supports a lot of developers. He said it was a shame the service was shut down. 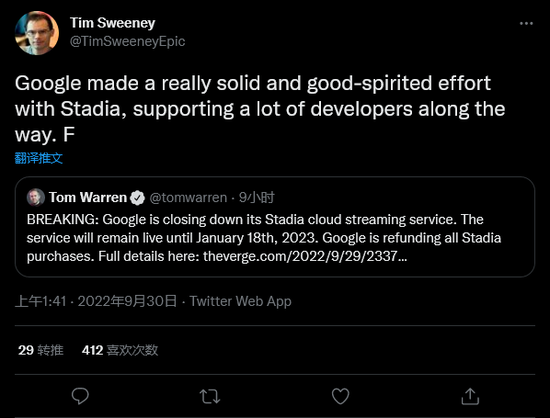 Tom Vian, co-founder of UK developer Tangle Tower's studio SFB Games, said Tangle Tower was due to launch on Stadia in two days, and that The Verge's report of its impending closure was The first he'd heard of it. Rebecca Heinmean of the Frozen Legend Studio also commented that they were working on the project. There's also a game coming out on the platform on November 1, which has just been announced. 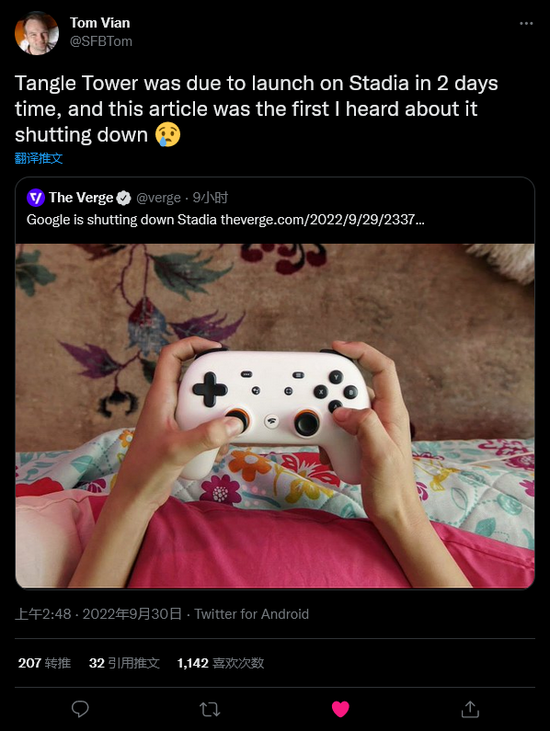 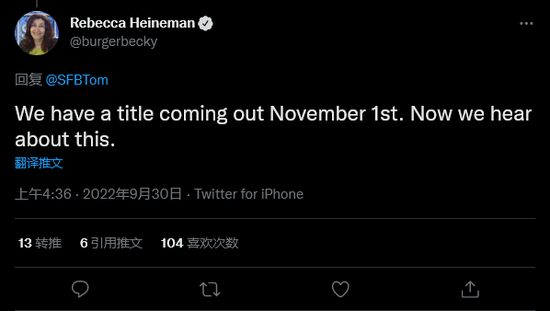 "A part of me feels bad for Google's amazing move with Stadia," said Rami Ismail, a game developer and consultant. When Google first approached me about the project, long before it was released, they had a lot of cool ideas. But the conservative approach, the lack of trust in developers and the absolute lack of investment -- Google killed it." 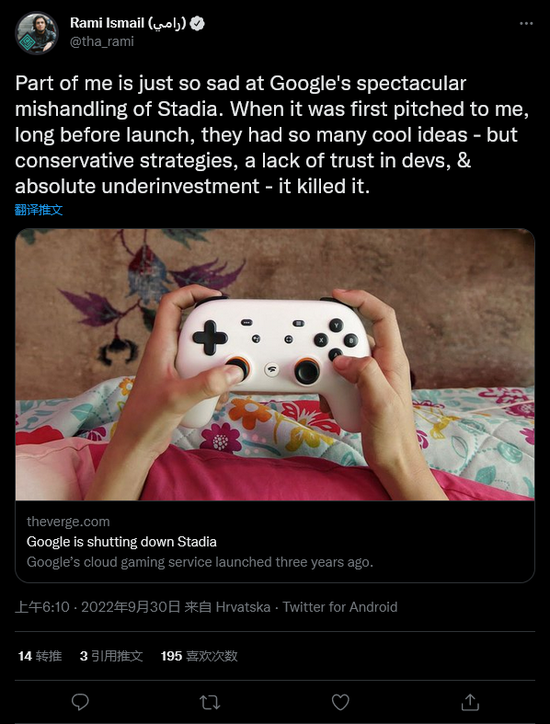 Mike Rose, director of the No More Robots studio, which recently launched the simulation-management game Let's Build a Zoo, also expressed his shock, saying, "Oh my God... We have a game coming out on Stadia in November. Who wants to guess if Google will refuse to pay the money they owe us for this?" 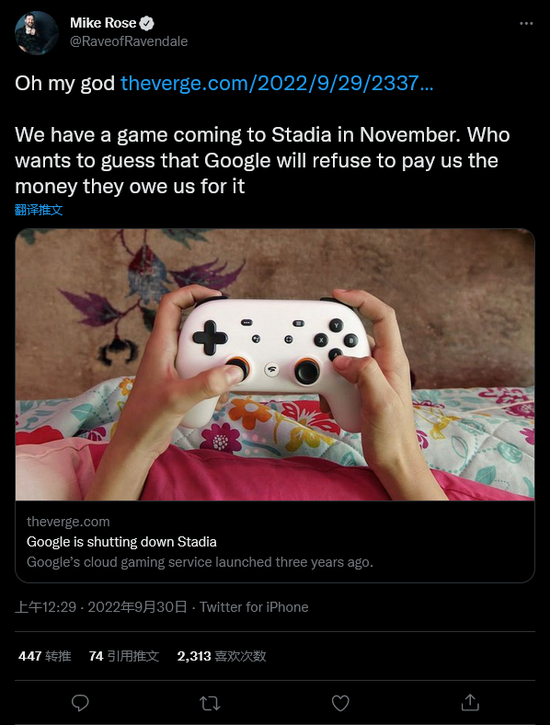 PC Gamer has reached out to Google for comment on what exactly this news means for those studios that have Stadia game deals with Google (such as Mike Rose) or studios that independently develop Stadia versions of their games, and whether Google will compensate them.

IT House understands that for Stadia users, the service will continue to operate until Jan 18, 2023. On the subject of saving game progress, Google said it might be reserved for "some games that support cross-platform play on other platforms," such as Destiny 2. However, "for most games," Google says keeping the game archive "will not be possible."

Related news
Facebook is testing the information panel function of the knowledge panel like
Google's Stadia controller is wired to connect another handle
Google stadia has "400 games" under development
Google will close the streaming media game service STADIA: Mark Cloud Game Attempt failed
"Chill" to Google Cloud Games: Stadia is shutting down tech "Soul" will still be saved
Google is shutting down its Stadia cloud gaming project, with the developers involved saying they had no knowledge of the plans
Google will shut down its cloud gaming service Stadia next year
Google Cloud gaming platform Stadia will close, with the underlying technology or focus on the toB business
Google's Stadia cloud gaming platform has abruptly shut down, and Ubisoft is moving games to PC for gamers
Hot news this week
Apple is recruiting neurorendering research scientists to create immersive experiences for AR/VR products
Tesla China will take the initiative to significantly reduce production if it still fails to sell by 40,000 yuan
The Internet reported that the Shanghai factory would voluntarily cut production by 20%, Tesla responded
Hangzhou Internet Court: NFT digital collection belongs to the network virtual property, protected by law
Amazon has withdrawn a new offer from its retail division, cutting off new employees who were due to start early next year
You know what? Looking at your phone while driving is the equivalent of driving blind for about 50 meters, which is extremely dangerous
The United States has approved the first fecal transplant to treat disease by transplanting someone else's feces
Dalitsu, a lens supplier for Apple's iPhone 14, reported revenue of NT $5.231 billion in November, up 20 percent from a year earlier
Transsion Holdings: Established a global strategic partnership with Google to carry out in-depth cooperation in areas such as Android system
Do the most lightweight and smooth system! - MIUI 14 will come soon: The flagship will also be upgraded two years ago
The most popular news this week
Activision Blizzard CEO says Microsoft acquisition will go ahead, FTC allegations are factually incorrect
Experts: do not take ibuprofen if you eat Lianhua Qingdian, separate Chinese and Western medicines
Up to 56 cores! The new generation of Intel processors is coming.
Upgrade second regret! Serious problems after AirPods Pro 2 update
Apple got Sony's flagship sensor! iP15 is now more expected
Ibuprofen does not have to compete for the world's largest production capacity in China: one company is enough for 3.3 billion people.
QQ level first in the world! I responded to make netizens envious: the family opened the Internet cafe
Cook's "no" to Musk: cost Apple 4.4 trillion
AI paintings fetch a record price of 1.1 million! Baidu's AI painting was tested and the result was amazing
Burst! Tesla China discontinues Model Y production