Be careful with your phone for a long time! The aunt played with her mobile phone so much that her fingers got stuck

December 1st, according to Western Decision, recently in Xi 'an, Shaanxi province,Aunt Li, 49, had repeated pain in the middle finger of her left hand for more than two months. Sometimes when she got up in the morning, her middle finger could neither stretch nor bend. Get stuck. The same, need external assistance. Pull & throughout; Just to activity, then came to the hospital.

Aunt Li revealed that she often did housework and recently needed to rely on her mobile phone to work. After a long time, the clicking of her fingers became more obvious. She even felt a hard lump the size of a grain of rice in the knuckle of her left hand.

Doctors say that for long periods of time, mobile phone use involves constantly swiping your fingers across the screen, which can cause them to bend a lot. In the long run, the blood flow in the fingers is easy to have problems, the formation of fingers. Ganglion cyst; . In addition, this may cause damage to the articular cartilage of the fingers, making it less able to absorb forces. In the most serious cases, the finger nerve is directly damaged, resulting in hand paralysis.

In addition, the neck is always low no matter the posture is comfortable or not. The cervical vertebra of normal people has certain physiological curvature. Playing mobile games for a long time will put too much pressure on the neck, which will gradually lead to chronic strain or fasciitis. In particular, people who take the wrong posture to play mobile phones may also make cervical vertebrae twisted. 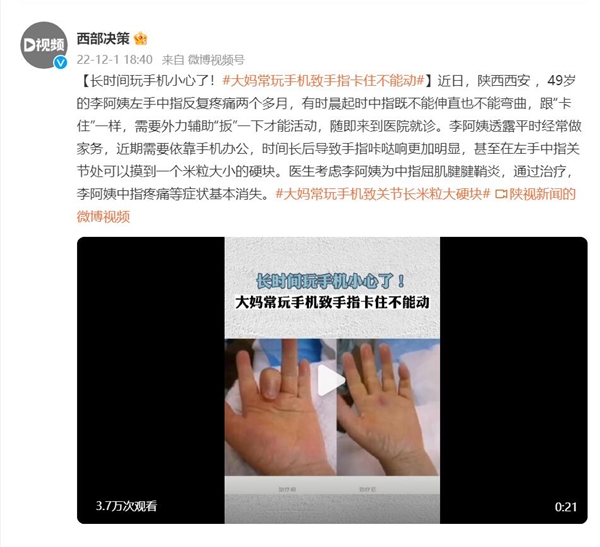